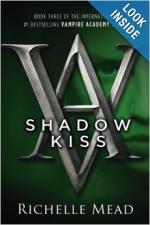 Richelle Mead
This Study Guide consists of approximately 29 pages of chapter summaries, quotes, character analysis, themes, and more - everything you need to sharpen your knowledge of Shadow Kiss.

Shadow Kiss by Richelle Mead is the third book in the Vampire Academy Series. In this novel, Rose is still struggling with the death of her friend, Mason, and the mistakes that forced her to kill two Strigoi vampires in Colorado. As a senior at the academy, Rose also finds herself in the middle of a guardian test she must pass in order to graduate. To add to her troubles, Rose begins seeing ghosts. Shadow Kiss delves deeper into Rose's relationship not only with her best friend and bond mate, Lissa, but with her guardian teacher, Dimitri. Shadow Kiss is a satisfying installment in the Vampire Academy series that will leave readers begging for more.

It is just a few weeks after the death of Rose's friend, Mason, and the fiasco in Colorado that caused Rose to have to kill two Strigoi for the first time. Everyone thinks Rose is still struggling with grief, but Rose finds herself thinking more and more about the future, not the past. As a senior, Rose is anticipating the beginning of the guardian test, six weeks guarding a Moroi. Rose assumes she will guard Lissa, therefore she is shocked when she is assigned to guard Christian, Lissa's boyfriend.

During the first test of the six weeks, Rose is confronted by a guardian pretending to be a Strigoi. Rose is prepared, but when she sees Mason standing a few feet away, she becomes distracted long enough for the fake Strigoi to take her Morois. Rose is brought before a panel of guardian instructors and forced to explain her actions. While Rose refuses to tell the truth, she manages to talk her way out of severe punishment. Later, Dimitri tries to get Rose to tell him the truth, but Rose is afraid of what Dimitri might think of her if he knew she was seeing ghosts and decides to keep the truth to herself.

A short time later, Rose learns that someone has arranged for she, Christian, and Lissa to testify at the trial of Victor Dashkov, the Moroi royal who kidnapped and tortured Lissa the previous fall. While in transit to the Moroi royal court, Rose suffers a terrible migraine that quickly passes when they land. Later, Rose becomes frightened when she receives a note from Dashkov threatening to reveal her love for Dimitri to the queen. Rose and Dimitri visit Dashkov and he asks after Lissa, proving to Rose that he only wanted to see her in order to learn more about Lissa. However, Rose does learn a few things about being shadow kissed from Dashkov that prove to be helpful later.

After the trial, Rose is on the plane returning to the academy when she is suddenly hit by a horrible headache and begins to see ghosts. Rose becomes so agitated that she screams and passes out. When Rose wakes in the academy infirmary, she is forced to tell Dimitri, the head of the guardians, and the doctor the truth. No one believes her and they come to the conclusion that she is suffering stress from Mason's death. Rose is forced to drop half of her guardian hours and to see a counselor.

A short time later, Lissa is tortured by a group of Moroi who are attempting to force her to use compulsion. When Rose arrives to rescue Lissa, she discovers Lissa using her powers to torture one of the worst of her tormentors. Rose takes away the darkness from Lissa through their bond, but this causes her to become filled with dark emotions. Dimitri leads Rose away from the others, taking her to an abandoned cabin where he slowly manages to convince Rose to calm down. They then consummate their relationship for the first time.

After leaving the cabin, Rose and Dimitri are on their way back to the academy when they become aware that Strigoi have somehow managed to get onto the property. Rose rushes back to the dorms to warn the others while Dimitri stays to fight. Rose joins the fight with Christian, who uses his magic to help slow down and stop the Strigoi. Afterward, the academy stages a rescue attempt the ends in Dimitri being bitten by a Strigoi. Rose decides to go after Dimitri so that she might kill him, rather than allow him to continue to live as Strigoi.

More summaries and resources for teaching or studying Shadow Kiss.