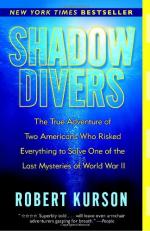 Plot Summary
+Chapters Summary and Analysis
The Book of Numbers
Zero Viz
A Shape of Power
John Chatterton
Crazy Deep
Richie Kohler
Horenburg's Knife
Nothing At That Location
A Heavy Toll
History Mauled
A Missed Signal
None Of Us Is Coming Back
The U-Boat is Our Moment and Circle Runner
An Audacious Plan
Epilogue
Free Quiz
Characters
Objects/Places
Themes
Style
Quotes
Topics for Discussion
Order our Shadow Divers: The True Adventure of Two Americans Who Risked Everything to Solve One of the Last Mysteries of World Wa... Study Guide

Shadow Divers: The True Adventure of Two Americans Who Risked Everything to Solve One of the Last Mysteries of World Wa... Summary & Study Guide

Robert Kurson
This Study Guide consists of approximately 29 pages of chapter summaries, quotes, character analysis, themes, and more - everything you need to sharpen your knowledge of Shadow Divers.

Shadow Divers: The True Adventure of Two Americans Who Risked Everything to Solve One of the Last Mysteries of World Wa... Summary & Study Guide Description

Shadow Divers: The True Adventure of Two Americans Who Risked Everything to Solve One of the Last Mysteries of World Wa... Summary & Study Guide includes comprehensive information and analysis to help you understand the book. This study guide contains the following sections:

This detailed literature summary also contains Topics for Discussion and a Free Quiz on Shadow Divers: The True Adventure of Two Americans Who Risked Everything to Solve One of the Last Mysteries of World Wa... by Robert Kurson.

"Shadow Divers" by Robert Kurson tells the true story of a group of amateur deep sea divers who discover a German World War II era submarine, a U-boat, sunken in the waters off the coast of New Jersey. They soon found that there were no official records listing a sunken sub at that location and set out to determine the identity of the mystery U-boat.

Kurson focuses on the two divers for whom the U-boat becomes something of an obsession, John Chatterton and Richie Kohler, who first meet while exploring the U-boat. Chatterton is a former medic who sees frontline action in Vietnam and eventually becomes a commercial diver with a serious and methodical approach. Kohler is a wild young man who becomes a hard-partying hotshot diver with a club that prizes the collection of undersea loot. The two men, both excellent divers, do not like one another at first, but eventually become close friends who collaborate on diving and researching official records in their mission to identify the sub.

Kurson creates a tense and suspenseful environment as he describes the extreme dangers of deep sea wreck diving, where a diver can easily become entangled in wreckage or panic from the effects of the high pressure. Several colleagues of Chatterton and Kohler die while diving the U-boat, and Chatterton and Kohler themselves have some harrowing close calls.

Over the course of several years, the two friends return to the submarine to look for clues to its identity. In between dives, they travel to Washington, D.C. to explore the records in the National Archives and correspond with other hobbyists and experts on the possible identification of the sub. Their obsession with diving and exploring the submarine damages the personal relationships each diver has with his family and Kurson describes the men's struggle to cope with the upheaval that ensues.

Their research at first points to a small number of subs that were known to have been patrolling along the American East Coast but that had never been accounted for. Eventually, however, their research suggests more and more the possibility that the sub is U-869, which is officially recorded as having been sunk near North Africa. The divers are finally able to confirm the identity after finding a spare parts box on the sub with a metal plate stamped with the U-boat's number.

The divers learn that there is one surviving member of the original crew of U-869, a radioman who was not on its last mission because he became sick as it was preparing to leave port. Using information from this survivor, Kurson recreates the scene as the original commander and crew of U-869 prepare to set out on their last mission.

More summaries and resources for teaching or studying Shadow Divers: The True Adventure of Two Americans Who Risked Everything to Solve One of the Last Mysteries of World Wa....

Shadow Divers: The True Adventure of Two Americans Who Risked Everything to Solve One of the Last Mysteries of World Wa... from BookRags. (c)2022 BookRags, Inc. All rights reserved.