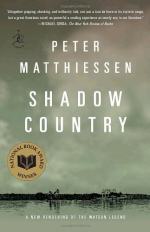 Peter Matthiessen
This Study Guide consists of approximately 123 pages of chapter summaries, quotes, character analysis, themes, and more - everything you need to sharpen your knowledge of Shadow Country.

The following version of this book was used to create this study guide: Matthiessen, Peter. Shadow Country. Modern Library, 2008.

Shadow Country has three books—Book I begins with a third-person narrator describing Edgar Watson’s death on the shore of Chokoloskee Bay. Book I then features 12 first-person narrators who recount Watson’s adventurous life in the Ten Thousand Islands. The narrators are Watson’s neighbors, friends, and family members, and each has their own distinct remembering of Watson’s time in Chokoloskee. Despite the contradictions and complications that plague many of their engaging oral histories, almost every narrator agrees that Watson is an attractive, clever, and an ambitiously handworker who helped revolutionize Florida’s sugarcane industry. But as universally as Watson is respected, he is similarly feared. Watson is known for his temper, his drinking, and his deadeye shot.

In due time, Watson’s Chokoloskee neighbors learn about Watson’s involvement in many murders ranging throughout the South, most notably the murder of Belle Starr. Watson does not denounce these rumors as untrue because he uses his intimidating reputation as a “desperado” to his advantage; no one messes with Edgar Watson and lives to tell about it. But eventually Watson is accused of murdering a young Chokoloskee couple named the Tuckers, and Watson’s “desperado” reputation works against him. Because he is the only suspect in the Tucker murder, Watson flees his home on Chatham Bend. Seven years later, he returns to Chokoloskee with a new young wife and children, but with him he brings a slew of new rumors—murders he may or may not have committed and trials he was narrowly acquitted from. Many of Watson’s old friends and employees shun him and his new family. Not long after his return to Chatham Bend, three of Watson’s harvest employees are reported dead. Unable to prove his innocence, Watson is murdered by a posse of his neighbors in front of his wife and children.

Book II is a third-person narration from Lucius Watson, Edgar’s son, that details his obsessive quest for the truth about his father’s life and death. Lucius longs to discern fact from fiction in his father’s convoluted and rumor-filled life, and travels throughout the South in search of the truth. Lucas interviews old family, friends, and former employers. Along the way, Lucius reunites with his long-lost brother, Rob, who, because of his fugitive status, is disguised as Arbie Collins. With Rob’s reluctant assistance, Lucius does uncover the truth behind some of his father’s most notorious rumors: Did Watson kill the Tuckers? Did he murder his employees before paying them? Did Henry Short shoot Watson first? The truth Lucius discovers at the end of Book II is not exactly the truth he was looking for, but it does conclude his frantic quest to better understand his father’s shadowy life.

In Book III, Edgar Watson finally tells his side of things in a first-person narrative that recants his entire life. Growing up in the pre-Civil War South, Watson was physically abused as a child and taught thorny codes of Southern honor by his father. To protect himself from his raging father, young Watson developed a violent and murderous alter ego, Jack Watson. After nearly killing his father as an early teenager, Watson set out on his own, traveling the South in hopes to develop his own agriculture enterprise. Everywhere he goes, however, Jack Watson overpowered the compassionate Edgar, and either engages in actual trouble or is accused of it. Still, Watson found success, love, and happiness throughout his travels, but more often than not he was inundated with scandal. Book III continues to tell Watson’s life story up until his death, shedding light on many of Book’s I and II’s most tantalizing mysterious. Book III concludes with a moving and reflective passage of Watson coming to grips with his crazy life, and he finally explains the truth behind his murder on the Chokoloskee Bay.

More summaries and resources for teaching or studying Shadow Country.