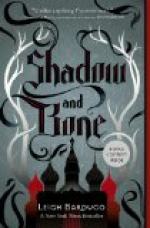 Ravka is the main setting of the novel "Shadow and Bone" by Leigh Bardugo. It is a beautiful land, though it is divided in half by the Shadow Fold, or the Unsea, thus separating its coast and West Ravka from the main part of the country and the capital.

West Ravka is the sliver of Ravka along the coast of the True Sea, separated from Ravka and the capital by the Shadow Fold. Major imports come through West Ravka, and must pass through the Shadow Fold to reach the main part of the nation. It is into West Ravka that Alina and Mal flee the Darkling.

The Unsea, the Shadow Fold

The Shadow Fold, or the Unsea, is a mass of great darkness that was created by the Darkling in the attempt to wield unbridled power. The Shadow Fold cut in half the nation of...