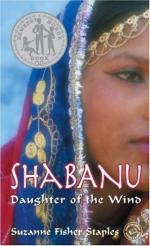 Suzanne Fisher Staples
This Study Guide consists of approximately 50 pages of chapter summaries, quotes, character analysis, themes, and more - everything you need to sharpen your knowledge of Shabanu.

Born in Philadelphia in 1945 to Helen Brittain Fisher and Robert Charles, Suzanne Fisher Staples grew up in northeastern Pennsylvania. She received a bachelor of arts in literature and political science from Cedar Crest College, Allentown, Pennsylvania, in 1967. She married Nicholas Green that same year, but divorced in 1976.

She married Eugene Staples in 1980.

Staples has lived in many places and had a variety of jobs during her career; she worked as a journalist, foreign correspondent, editor, and consultant during the 1970s and 1980s for Business International Corporation, United Press International, the Washington Post, and the U. S. Agency for International Development. In the late 1980s she published her first young adult novel.

While engaged in her various positions, Staples lived in Pakistan in 1980 and again from 1985 to 1988, where she interviewed many Muslim women. This research became the impetus for her fiction writing, beginning with Shabanu...

Shabanu: Daughter of the Wind from BookRags. (c)2022 BookRags, Inc. All rights reserved.