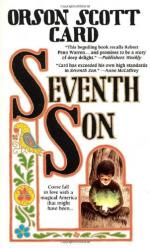 Orson Scott Card
This Study Guide consists of approximately 45 pages of chapter summaries, quotes, character analysis, themes, and more - everything you need to sharpen your knowledge of Seventh Son.

Seventh Son by Orson Scott Card is about a young boy named Alvin Miller Jr. and the trials that he faces as he grows up. The book is set in Colonial America; however, it is slightly different than traditional history because most of the people have magical abilities. Also, some events that formed US history never took place, which changed their world.

Before Alvin is born, his mother, Faith, while pregnant with him, is trapped inside a wagon on a raging river. She survives because her oldest son, Vigor throws himself in the pathway of a tree about to destroy the wagon. Faith and her family are taken to safety in a nearby town, where she gives birth at Peggy Guester's house.

Peg Guester's daughter, Little Peggy is five at the time and helps by using her sight at the birth of Alvin Jr. Peggy is a torch, which is a powerful ability that enables her to see peoples' true thoughts and their potential future and past. When she touches Faith during the birth, she sees constant incidents of drowning in the baby's life and realizes that it is her job to protect him from evil forces. He is a Maker who may help save the world from the Unmaker.

Alvin Jr. is unaware of his importance, so he is able to have a fairly normal childhood. He also takes his ability to talk to animals/insects for granted, as well as his skills at creating objects. Alvin does not know that Peggy saved his birth caul and is able to see and protect him from great distances.

Peggy's heavy burden at a young age, due to her ability to see the future of others as well as some people's distrust and anger of her knack, causes her to grow up quickly. She becomes a reclusive, slightly bitter young woman who, despite her anger, refuses to blame Alvin or let anything bad happen to him. Peggy realizes her life might be better if she did not save Alvin, but she also knows that without her help, the Maker will die young.

Other people in Alvin's life are being swayed by the forces of good and evil. Reverend Thrower is being visited by what he thinks is an angel of God but is actually the Unmaker. Alvin's sister's husband is also influenced by the Reverend, and both believe the Miller's to be unchristian and a dangerous influence on the town. Alvin is also visited by a Shining Man, who helps him to understand that his knack needs to be used to help others not selfishly for himself.

Alvin is learning right from wrong and Peggy's sacrifice seems to be worth the effort. He is intelligent and striving to be good; however, he has to do a great deal of maturing before he will be a true challenge for the evil Unmaker. Luckily, he has a protective angel in Peggy as well as many good people around him to guide him.

More summaries and resources for teaching or studying Seventh Son.