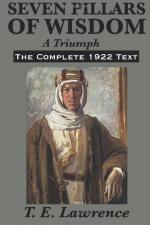 T. E. Lawrence
This Study Guide consists of approximately 60 pages of chapter summaries, quotes, character analysis, themes, and more - everything you need to sharpen your knowledge of Seven Pillars of Wisdom.

This detailed literature summary also contains Topics for Discussion and a Free Quiz on Seven Pillars of Wisdom by T. E. Lawrence.

Seven Pillars of Wisdom by T.E. Lawrence is the story of the Arab Revolt against the Turkish Empire and Lawrence's role in it. Lawrence, educated at Oxford, begins by working for a museum on an archaeological dig in the Middle East at the outbreak of the First World War. He is commissioned into the British Army while at the Euphrates and is attached to the Hejaz Expeditionary Force with Lawrence functioning as the British soldier attached to the Arab leadership in the revolt against the Turks. The Arab region is a part of the Ottoman Empire at the opening of the book. Turkey is an ally of Germany in the war and England feels that helping the Arabs defeat the Turks helps England in her war against Germany.

The book opens with Sherif Hussein as Emir of Mecca. The term "Sherif" means that the person is descended from the prophet Mohammed and as a descendent of the prophet, he is the ruler and the Emir's family, which has been the ruler of his people in Mecca for over nine hundred years. While the Emir is held an honorable captive in Constantinople, he sees that his four sons, Ali, Abdulla, Feisal, and Zeid have a good and modern education: these four sons become the leaders of the armies involved in the Arab Revolt. At this time the lands of the Arab world are inhabited by different tribes, most of whom acknowledged King Hussein as their leader, even though they had no obligation to serve in his army. Service had to be negotiated with the leaders of the tribes, most of whom were paid by the King and would only serve in their own immediate area. The tribes do not travel from battle site to battle site; only the four sons and their officers do. So there is no organized Arab army at the time of the revolt.

The book's setting is in the deserts of Arabia and much of the book has to do with what happens on the various marches. There is a great deal of time spent marching through the desert with camels and the telling of the events through Lawrence's eyes. Lawrence is not a professional soldier, but functions as an advisor to the Arab leadership and a liaison between the British Headquarters and Hussein and his sons. He advises them on military strategy, helps them devise attack plans, and helps carry them out. He becomes an expert on wiring and blowing railroad bridges; the work of Lawrence and his teams is instrumental in leading to the Turkish defeat in the region since he devises the plan of blowing the bridges that leads to the Turkish retreat from the Jordan valley and the capture of Medina.

Arriving as a stranger to the Arab thoughts and customs, Lawrence learns their language and way of life. Adopting Arab dress at the suggestion of Feisal, he is accepted as one of the Arab leadership and becomes known as Lawrence of Arabia for his work in the revolt. Lawrence returns to England after the war and is killed in a motorcycle accident in 1935.

More summaries and resources for teaching or studying Seven Pillars of Wisdom.