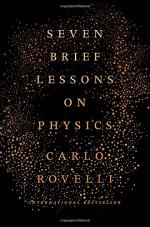 The following version of this book was used to create this guide: Rovelli, Carlo. Seven Brief Lessons on Physics. Penguin Books, 2016. First edition.

Carlo Rovelli introduces the basics of several theories that were developed by physicists in the twentieth century. He explains how Einstein conceived of special and then general relativity. Einstein published three groundbreaking papers simultaneously at the age of 26. Rovelli explains that relativity imparts that space and the gravitational field are one and the same thing. He also describes the theory’s beauty in its simplicity, and shares that he began to understand it through the inspiration of the Mediterranean ocean.

Rovelli explains quantum mechanics’ origins in Planck’s trial to divide energy into ‘packets.’ Einstein’s wave-particle duality showed that light truly is quantized, and Bohr’s atomic research showed that electron energies are too. Quantum mechanics describes positions and motion through probability, particles appear and disappear, and things can only be located completely during a collision. The theory behind quantum physics is still not understood entirely, but the equations that were developed have been used to build a variety of technologies.

The third lesson gives a quick overview of the development of human understanding of the structure of the universe. From solely the ground and sky, the view expanded to a spherical Earth. Then came the heliocentric theory, and eventually people were able to observe many solar systems. Now we know that our galaxy is one of many in a constantly expanding universe whose boundaries we cannot observe.

Particle physics studies the elementary particles – photons, electrons, quarks, and gluons – as well as neutrinos and Higgs bosons. These particles are also just quanta and move according to quantum mechanics. The Higgs bosons were first observed as recently as 2013. The current theory of how these particles function, the Standard Model, has many flaws and is still very much under development. Many scientists do not consider particle physics credible but its theories are evolving as we speak.

The fifth lesson is named “Grains of Space” and tackles the contradictions between relativity and quantum physics. In relativity, things are continuous and space can curve, but in quantum physics, space is flat and things are quantized. Rovelli describes loop quantum gravity, which attempts to combine the two views. The loops are links that form space, the connections between quanta of gravity. This is Rovelli’s field of research.

Rovelli looks into the possibility that the flow of time is an illusion. He asserts that heat exchange is the way to determine if time has passed and explains the analysis of heat via probability. He then goes into how probability is tied to a person’s subjective, limited view of the world. His theory is that considering these elements together will reveal the true nature of time.

The last chapter explores humans’ role and self-concept in light of the presented discoveries. Rovelli ensures that individuals can be singular entities according to their desire, even if they are made of constantly disappearing and re-appearing particles or space that curves. He also emphasizes that complex thoughts, deep feelings, and neurochemical processes are all a part of nature. Similarly, humans are an equal and integrated part of nature, as much as any other of its elements.