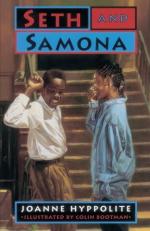 Books Like Seth and Samona by Joanne Hyppolite | Suggested Reading

Joanne Hyppolite
This Study Guide consists of approximately 45 pages of chapter summaries, quotes, character analysis, themes, and more - everything you need to sharpen your knowledge of Seth and Samona.

Edwidge Danticat was born in Port-au-Prince, Haiti, in the same year that Joanne Hyppolite was born. Her collection of short stories about Haitians and Haitian-Americans, titled Krik? Krak!, was published the same year as Seth and Samona and was nominated for the National Book Award.

Taste of Salt is a novel of modern Haiti by Frances Temple, capturing local traditions and customs. It was written at about the same reading level as Seth and Samona. Published in 1991 by Orchard Books, New York.

Joanne Hyppolite's other novel to date is Ola Shakes it Up (1998), about a child, Ola, who moves from the city to an all-white, rules-andregulations controlled suburb, and proceeds to initiate her own "Operation Shake 'Em Up" to bring a little life to the place.

Nine-year-old Gillian and her best friend Hank are the main characters in Amy Hest...

More summaries and resources for teaching or studying Seth and Samona.

Seth and Samona from Gale. ©2005-2006 Thomson Gale, a part of the Thomson Corporation. All rights reserved.