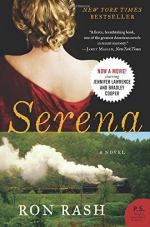 Ron Rash
This Study Guide consists of approximately 85 pages of chapter summaries, quotes, character analysis, themes, and more - everything you need to sharpen your knowledge of Serena.

This detailed literature summary also contains Quotes and a Free Quiz on Serena by Ron Rash.

Serena by Ron Rash is set in North Carolina during the Depression. It is the story of Serena, a greedy timber baroness who will stop at nothing to achieve her goals. Serena and her husband, George Pemberton, take on the government in an attempt to stall the national park movement in order to continue logging the land. Serena's obsession with Pemberton and her desire for power lead her to threaten the lives of Pemberton's one-time lover and her illegitimate son.

As the novel begins, Serena arrives in North Carolina for the first time shortly after meeting and marrying George Pemberton. When the two arrive at the train station, they are met by Abe Harmon and his pregnant daughter, Rachel. Harmon threatens Pemberton with a knife and Serena encourages Pemberton to kill the man. Serena then hands Rachel Harmon's pearl-handled knife and advises her to sell it since she'll be getting nothing more from Pemberton.

When Serena arrives at the lumber camp, Pemberton introduces her to the workers and instructs them to follow her orders as they would his own. Serena proves her knowledge of the timber industry by challenging Bilded, a foreman, to out-guess her on the board feet of a large tree. When Serena wins, the workers begin to attribute all sorts of mythical qualities to the unconventionally beautiful Serena.

Harris arrives at the camp and discusses the national park movement with the Pembertons. Like them, he opposes the creation of a national park. Pemberton plans to partner with Harris to purchase a new lumber tract. Serena expresses a desire to begin logging in Brazil.

Rachel gives birth to a son whom she names Jacob. She continues to live in her father's cabin and cares for the farm on her own. She is very poor and sells her animals to pay for the things she and Jacob need.

Serena has an eagle delivered to camp that she trains to hunt and kill snakes on the logging job. When the eagle is trained, she rides around the logging job on her enormous Arabian horse with the eagle perched on one arm, leading the men to spread ever wilder tales about her mythical qualities.

Rachel comes to the camp and asks for a job. Pemberton asks Serena's permission to employ her and Serena tells him he must be the one to offer the job and that he must make it clear to her that she has no claim on Pemberton. Rachel is treated poorly by the other women working at the camp because of her affair with Pemberton, but Joel Vaughn, a young man she went to school with, continues to treat her well.

A national park delegation arrives at camp to speak with the Pembertons. Serena senses their partner, Buchanan, is wavering in his loyalty to them. She instructs Pemberton to take Buchanan hunting the next day. During the hunt, Pemberton "accidentally" shoots Buchanan in the back. Sheriff McDowell does not believe it was an accident, but cannot prove it.

Serena becomes pregnant and continues to ride around the work site keeping her pregnancy hidden from the workers. However, when Galloway's hand is cut off in an accident, Serena jumps from her horse to save his life and reveals her condition. Galloway is certain he will live because his mother prophesied he would be injured and saved by a woman who he would be bound to serve for the rest of his life.

The Pembertons and Harris check out a tract of land in Jackson County and Harris is adamant that they purchase that piece of land rather than another they'd been considering. He threatens to refuse to partner with the Pembertons if he doesn't get his way. Serena allows the Jackson County purchase, but puts in the contract that Harris cannot mine there until they are done logging the land.

Serena loses the baby she is carrying when she begins having stomach pains. Doctor Cheney misdiagnoses her. As a result, Galloway kills Cheney. The Pembertons pay off law officials to leave the murder unsolved. Serena is unable to have more children. She returns to work soon after the loss of the baby and the workers are deeper in awe at a woman who survived such an ordeal.

Meanwhile, Pemberton begins to take interest in his and Rachel's son Jacob. He notices how much the child looks like him. He has a picture of Jacob, which he compares to a picture of himself as a child.

Campbell, the honest foreman who had been instrumental in running the logging camp, deserts the camp. Serena has Galloway track him down and kill him for his lack of loyalty.

The Pembertons meet potential investors at a dinner party at the Biltmore Estate. Serena sells them on the idea of investing in her Brazil venture. At the party, they discover Harris was tricked into thinking the Jackson County land was rich in precious gems. Serena is angry and instructs Galloway to kill Harris in spite of Pemberton's protests.

Serena then sends Galloway after Rachel and Jacob. Pemberton is upset by this and begins to drink more. McDowell is tipped off by Joel Vaughn about the impending murder and takes Rachel from her cabin before Galloway gets there. Galloway murders Rachel's neighbor, Widow Jenkins. When McDowell questions Pemberton about the murder, Pemberton insists Serena had nothing to do with it. But, when McDowell leaves, he takes his hunting knife out of a drawer and discovers it's covered in still damp blood. He wipes the blade and puts it back. Later, he gives McDowell a great deal of money and instructs him to give it to Rachel. He doesn't want to know where she is. McDowell helps Rachel escape the area and instructs Joel Vaughn to get on the next freight train. McDowell is fired from his job as sheriff and the Pembertons have a man they can bribe hired in his place.

Rachel goes to Kingsport where she stays for a time. McDowell tells her he will continue to pursue the Pembertons even though he's been fired. When Rachel sees Galloway in Kingsport she escapes on a freight train and ends up in Knoxville. She calls McDowell and he tells her to take the first train out of there. McDowell sets fire to the Pembertons' house, but they escape and see him sitting outside the burning building with an empty kerosene can. He is arrested.

Rachel arrives in Seattle, Washington where she believes Vaughn will have gone. She gets a job at a café. The owners are kind people who feed her and allow her to bring Jacob to work with her.

Serena throws a thirtieth birthday party for Pemberton. She arranges for Galloway's mother to provide entertainment at the party by telling the futures of the party guests. Serena tells Pemberton to ask Mrs. Galloway how he will die. Mrs. Galloway tells him it will take more than one thing to kill him.

The next day Pemberton goes out hunting with Galloway. Galloway feeds him a sandwich that Serena laced with rat poison. He then instructs Pemberton to crawl up on a ridge. Pemberton is bitten by a snake and falls. Galloway cuts the bite to release the poison, but Pemberton knows he cuts too deeply. Galloway then reveals to Pemberton that Serena instructed him to kill Pemberton because she knows he helped Rachel to escape. He tells Pemberton he tortured information out of McDowell before killing him, but McDowell never did give up Rachel's location. Galloway leaves Pemberton to die in the woods.

The novel closes with a coda set in 1975. Serena is in Brazil where she has been a successful timber baroness for many years. She has a picture of her and Pemberton hanging on her wall. Rachel, who is in the hospital awaiting a heart surgery, reads an article about Serena in a magazine. She tears the article out and shows it to Jacob. The next month, Jacob travels to South America where he kills both Galloway and Serena. A man who witnesses the event swears he saw the man from Serena's picture standing behind her as she died.

More summaries and resources for teaching or studying Serena.