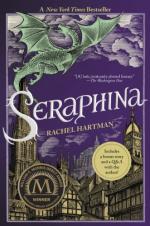 Related Topics
Tess of the Road

Rachel Hartman
This Study Guide consists of approximately 59 pages of chapter summaries, quotes, character analysis, themes, and more - everything you need to sharpen your knowledge of Seraphina.

Seraphina by Rachel Hartman is a fantasy novel about a young woman torn between keeping a lifelong secret and protecting her kingdom and those she loves. When Seraphina begins to suspect a plot against the Ardmagar Comonot, she must lie to warn Prince Lucian of the dangers without revealing the secrets of her parentage, but her lies begin to unravel as her secrets play a large role in her suspicions. Seraphina offers an intriguing narrative that will keep readers captivated.

Seraphina is secretly a half dragon who is mentally connected to seventeen other half dragons through her mental garden, and she also has access to some of her dead mother's memories. After she sings at the funeral of Prince Rufus, who the people suspect was killed by a dragon, Seraphina worries more than ever about her secret being discovered. Orma, her dragon teacher and uncle, receives a coin that belongs to his father, Imlann, and he suspects that Imlann is plotting against the Ardmagar Comonot. Thomas Broadwick nearly kills Seraphina for being a quig lover when he finds her in possession of a quig-made lizard figurine. During the preparations to celebrate Treaty Eve, Seraphina is excited to encounter three of the people from her mental garden in reality.

When two exiled knights report seeing a rogue dragon, Seraphina and Prince Lucian visit the knights' cave where Sir James confirms that the rogue dragon is Imlann. On the way home, Imlann appears and threatens Lucian and Seraphina, causing her to summon Orma using his earring, and, furious at Seraphina's lies, Lucian arrests both of them. Queen Lavonda pardons Seraphina, but Comonot orders Orma to have his emotions excised. Due to a rumor that Seraphina is a dragon, Lady Corongi and Princess Dionne attack and bleed her.

Later, Seraphina is bombarded by her mother's memory, learning that Imlann and a cabal of generals plot against Comonot, but as she tries to convince Comonot that he is in danger, a priest she saw talking to Josef stabs her, causing her to suspect that Josef is actually Imlann in disguise. Since she tells Lucian and Glisselda of her suspicions, they agree to keep a close watch on Comonot throughout the Treaty Eve festivities. Realizing that no one knows where Princess Dionne is, Lucian, Seraphina and Comonot rush to her room to find she has been poisoned by wine given to her by Josef. They search for the rest of the royal family and find Lady Corongi, Princess Glisselda and Queen Lavonda toasting the new year with Josef who insists that he received the wine from Lady Corongi. After Seraphina's lizard figurine calls Lady Corongi an imposter, she turns into Imlann and carries Glisselda away. With the help of her grotesques, Seraphina is able to retrieve Glisselda while Orma battles Imlann in the air. Orma is injured, but a group of dragons kill Imlann.

Seraphina confesses that she is a half dragon, a fact that Glisselda accepts but Lucian struggles with. When the cabal of generals sends a note to Goredd demanding Comonot be returned so they can try him for his crimes against dragons, Glisselda, acting in the place of Queen Lavonda who is still ill from the wine, refuses to relinquish Comonot, deciding to go to war in order to continue the peace. Seraphina admits to Lucian that she loves him, and though he returns her feelings, they must wait until the war ends and Glisselda is settled in her new role as queen. Seraphina is content because she is no longer alone.

More summaries and resources for teaching or studying Seraphina.