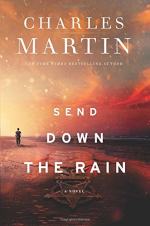 Related Topics
The Mountain Between Us

Charles Martin
This Study Guide consists of approximately 66 pages of chapter summaries, quotes, character analysis, themes, and more - everything you need to sharpen your knowledge of Send Down the Rain.

Send Down the Rain Summary & Study Guide includes comprehensive information and analysis to help you understand the book. This study guide contains the following sections:

This detailed literature summary also contains Quotes and a Free Quiz on Send Down the Rain by Charles Martin.

The following version of the novel was used to create this study guide: Martin, Charles. Send Down the Rain. Thomas Nelson, May 8, 2108. Kindle.

In Send Down the Rain by Charles Martin, brothers Joseph “Jo-Jo” and Bobby Brooks were never the same after their father left their mother for another woman. Joseph took from his father’s departure that his father was not proud of him while Bobby believed that his father left because Bobby was not masculine enough. Even after Joseph returned from Vietnam a decorated war hero and Bobby had served multiple terms as a popular senator, their lives were still haunted by secrets from their family’s past. It was only after these secrets become public that Joseph and Bobby were able to truly heal.

After their father left, Joseph and Bobby befriended Allie Pine, whose parents owned the iconic Blue Tornado restaurant. Allie’s father, Billy Pine, was an abusive alcoholic. A split in the brothers’ relationship came when Bobby and Joseph went to protect Allie when her father was in an alcohol-induced rage. Joseph had grown into a teen who physically fought others to prove his worth. Bobby was empathetic and wanted to help those who needed assistance, but he did not have the courage to do so. Bobby was the one who alerted Joseph to what was happening to Allie and said they needed to intervene. Even so, when Bobby and Joseph got into Allie’s room, Bobby urinated on himself out of fear. Joseph stepped between Billy and Annie's mother. Billy broke Joseph’s jaw. Bobby jumped on Billy and bit off part of his ear after Billy attacked Joseph, but Bobby did not receive the recognition Joseph did for standing up for the women.

When Bobby’s draft notice came, Bobby and Joseph's mother asked Joseph to take Bobby and go to California to avoid the draft. Their mother was afraid that Bobby, still empathetic and trusting, would be killed in the war. Instead, Joseph, went in his older brother’s place. When Joseph said goodbye to Allie, his love, he did not tell her where he was going, but he did promise to return. Bobby, meanwhile, pretended that he was going to war but really went to California where he got a job and rented an apartment in Joseph’s name. Two years later, when Bobby returned to Cape, Allie had not heard from Joseph. He had not kept his promise to return. Bobby convinced Allie he had been to war. She fell in love with him and they got married. Joseph had returned from Vietnam at that point but was trying to get his thoughts straight before he saw Allie. When he did arrive home, he got there just in time for Allie and Bobby’s wedding. Bobby was wearing Joseph’s war medals on his chest.

Thirty years later Joseph returned home to check on Allie after driving a Mexican woman tricked into marrying a drug runner to Florida to be with her brother. Joseph had killed the woman’s husband to protect her and her children. In Cape San Blas, Joseph learned that Allie’s husband had been killed in a tragic semi-wreck. As he was helping her through the process of burying her second husband, Joseph began to suspect something was not right. He determined that Jake, Allie husband, had faked his own death. He had been using her by draining her savings and making her take out liens against her family’s restaurant, which she eventually had to close when the bank foreclosed on the mortgage.

Joseph told Allie he had the financial resources needed to get the restaurant back up and running. About the same time, Joseph received a phone call from Catalina, the Mexican woman, telling him that her brother and three of his cousins had been attacked by Juan’s men. Joseph took them to the safety of the Cape. When they saw what needed to be done to the restaurant the men showed their gratitude by offering to make the repairs to the restaurant.

When the restaurant was open and running, Allie invited Suzy True, a radio personality who had a special relationship with veterans, and knew Joseph well, to broadcast her show from the restaurant. On the final night of Suzy’s show, she was confronted with documents that indicated that Bobby had never served in the war but had instead been living in California. Allie tracked Joseph down. Together, they went to Suzy’s hospital room after she tried to commit suicide because she had lost faith in people. Joseph told Suzy a story of how he had met her father in the war. He gave her a baby picture of herself, her father’s dog tag, his watch, and his Bible as proof.

Back at the restaurant, Juan’s men located and tried to hurt Catalina’s family again. One of the men was killed by Catalina’s young son Diego with his father’s knife. Joseph chased the others down and killed them on the beach when it became apparent those men intended to kill him. Joseph was charged with murder and found guilty.

At the sentencing hearing, Bobby was among those who testified on Joseph’s behalf. He said that the reason Joseph did not have a military history or identification number in his name was because he served under Bobby’s name. Bobby had used Joseph’s war record to get him his job. The judge exonerated Joseph for his crimes and told him to go and live the life he had never gotten to live. After Bobby was forced to resign from his position as senator, Joseph tracked down Bobby and told him that he had never outed Bobby because he had never thought that Bobby was evil. He had lived with the hope that one day he and Bobby would "get back to good," meaning they would return to how they used to be.

More summaries and resources for teaching or studying Send Down the Rain.

Send Down the Rain from BookRags. (c)2022 BookRags, Inc. All rights reserved.