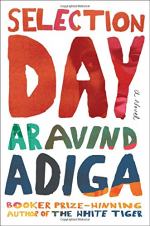 Aravind Adiga
This Study Guide consists of approximately 40 pages of chapter summaries, quotes, character analysis, themes, and more - everything you need to sharpen your knowledge of Selection Day.

This detailed literature summary also contains Quotes and a Free Quiz on Selection Day: A Novel by Aravind Adiga.

Note: The following version of this book was used to create this study guide: Adiga, Aravind. Selection Day. Scribner, 2016.

Selection Day is a novel following the story of the Kumars, a family living in Mumbai, India. Selection Day is set around present day, and its main character is Manjunath “Manju” Kumar, the younger of two brothers. His brother Radha is about one year older, and their father, Mohandas “Mohan” Kumar, has been training them as cricket players from a very young age. The Kumars are very poor, and they moved to Mumbai from a village in Western Ghats. Not long after moving to Mumbai, Mohan’s wife (Manju and Radha’s mother) left the family and went off on her own. The family grieved, but Mohan soon decided to focus his energies on training his sons to be professional cricket players in the hopes that they may be raised out of poverty. Mohan prays to the Hindu deity Subramanya, asking for Radha to become the best cricket batter in the world, and for Manju to become the second best. When the boys are in their early teens, they attract the attention of a man called Tommy Sir, who is a talent scout for the Mumbai Cricket association. He helps negotiate a sponsorship deal for them with a wealthy man named Anand Mehta. Mehta agrees to support the Kumars financially in exchange for a percentage of Radha and Manju’s future cricket earnings if they become professionals.

After a year of saving money from the sponsorship deal, the Kumars move from the Mumbai slum of Dahisar to the wealthy Mumbai suburb of Chembur. Manju and Radha continue to attend the Ali Weinberg International School and play for the school’s cricket team. One of their teammates, Javed Ansari, emerges as a significant cricket talent, rivaling Manju and Radha. However, Radha remains the best cricket player at the school, setting a new batting record for their age group. But meanwhile, further friction builds between the Kumar brothers and their father. When Mohan catches Radha with a girl in the house, there is a physical altercation between Mohan and his sons, and Mohan ends up in the hospital with a broken leg. Also, Manju secretly wishes to be a forensic scientist, and he forms a friendship with Javed Ansari, who encourages Manju’s non-cricket interests. Tensions among the Kumars rise even further when Manju surpasses his older brother’s cricket abilities and is awarded a cricket scholarship by the school over Radha. These tensions come to a head on selection day, when Manju and Radha try out for a professional cricket team. Radha, who desires only to be a professional cricket player, does not perform well enough to be selected, and Manju, who does not truly want to play cricket, despite his talent, performs quite well. Radha, in his frustration, attacks a fellow cricket player and must flee to his family’s old village to escape the police. Meanwhile, Manju flees to Javed’s apartment and says he will never play cricket again. Manju and Javed’s relationship almost becomes sexual, but then Manju runs away from Javed’s apartment to go home and continue to pursue cricket.

In the end, Manju is selected to play cricket professionally, and Radha is not. Manju plays in the Under-19 league for three years, and then for Mumbai’s professional cricket team for three years. However, he is then transferred to a novelty league, batting as a non-celebrity in a celebrity cricket league. He is finally fired on his 27th birthday and is hired as a talent scout for the Mumbai Cricket Association. Radha returns to Mumbai not long after fleeing, and he remains generally unemployed, likely receiving financial support from Manju. Neither Radha nor Manju keep in close contact with their father. By this time, Javed has become a con man and a failing actor, and Tommy Sir has died of a stroke not long after Radha and Manju’s selection day.

More summaries and resources for teaching or studying Selection Day: A Novel.