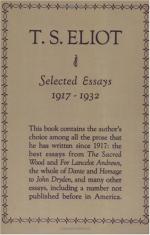 T. S. Eliot
This Study Guide consists of approximately 55 pages of chapter summaries, quotes, character analysis, themes, and more - everything you need to sharpen your knowledge of Selected Essays of T. S. Eliot, 1917-1932.

1590s: The British Empire is just beginning. With the defeat of the Spanish Armada in 1588, the seas are open to British trade and exploration, and British culture is showing the beginnings of racism towards future colonies.

1920s: The British Empire is still strong, and Britain is still pervaded by imperialist thinking that emphasizes the superiority of British culture.

Today: The British Empire has crumbled, and the British public is far more skeptical of notions of cultural superiority.

1590s: Although Elizabeth I shows a greater degree of religious tolerance than the previous ruler, all British subjects are required to be members of the Church of England. In practice, a significant number of Puritans and Catholics retain their own beliefs. Atheism is taboo and very uncommon.

1920s: The Church of England is building up to a crisis, with its authorities of very different minds about how...