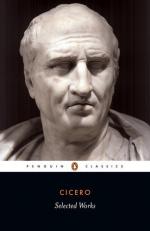 Cicero
This Study Guide consists of approximately 25 pages of chapter summaries, quotes, character analysis, themes, and more - everything you need to sharpen your knowledge of Selected Works.

This detailed literature summary also contains Topics for Discussion and a Free Quiz on Selected Works by Cicero.

Cicero: Selected Works is a translated and edited compilation of some of the most famous writings of Marcus Tullius Cicero. Cicero (106-43 B.C.) was a famous statesman, orator and philosopher who lived during the end of the Roman republic and the rise of the Roman empire. He was seen as among the most brilliant and civilized 'old men' of the Roman republic, even during the rule of Julius Caesar. After the death of Hortensius when Cicero was a young man, Cicero was widely regarded as the greatest orator in the entire Roman world. Yet Cicero did much more than this. He wrote many works, philosophical, rhetorical (concerning rhetoric), political, legal and oratorical.

This work contains four of Cicero's most important works and twenty-four of his letters. The first chapter is his famous oration "Against Verres." There are a series of seven speeches that Cicero made against the infamously corrupt governor of Sicily, Verres. Cicero was then a young lawyer looking to promote his reputation. The first Against Verres speech is found in the book. The speech is intended to convince the jury to convict Verres for his crimes. The second chapter is a compilation of twenty-four of Cicero's letters. Cicero wrote over eight-hundred letters during his lifetime, but the editor of the book has selected twenty-four letters as a cross-section of his writings to friends, family and statesmen. The letters string together Cicero's struggles to protect the Roman republic from decay and to preserve Roman liberty despite the dictatorship of Caesar.

Chapter 3 records the Second Philippic. This is one of fourteen speeches that Cicero gave to defend himself against the rhetorical slander of Marc Antony against him. After Caesar is assassinated, Cicero returns to Rome but others are vying for Caesar's level of power - Antony is among them. Antony has viciously assaulted Cicero's character and political career. The Second Philippic has Cicero defend himself and launch a counterattack on Antony.

Chapter 4 is a reprinting of the third book of Cicero's famous work On Duties which is one of his most important works of moral philosophy, if not his most important. Cicero was a defender of the classical Greek moral philosophy of Stoicism and in the book he defends a version of Greek Stoicism advanced by a late Greek Stoic named Panaetius. The book is addressed to Cicero's son Marcus and concerns whether what is right and what is beneficial can ever conflict. Chapter 5 rounds out the book with a piece Cicero wrote towards the end of his life - On Old Age. On Old Age is a dialogue Cicero wrote between two young men and Cato the Elder on the costs and benefits of growing old. It reveals many of Cicero's reflections on aging.