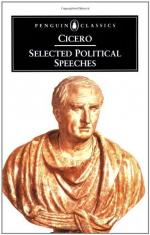 This detailed literature summary also contains Topics for Discussion and a Free Quiz on Selected Political Speeches of Cicero by Cicero.

Cicero (106 - 43 B.C.) was a famous philosopher, orator and statesman during the upheavals that ultimately led to the destruction of the Roman republic. He was widely regarded as one of the most intelligent and civilized 'old men' of the republic, even during Caesar's dictatorship. Further, he was thought to be the greatest orator in the Roman world during his life. Cicero wrote a variety of philosophical, rhetorical (on the study and practice of rhetoric), political and legal works. However, this compilation does not include any of those works. Instead, it is composed entirely of his speeches. There are nine, and they are ordered chronologically through his life.

The first speech, "In Verrem I" is one of two 'juridical' orations included in the book - it is given in court and is intended to defend or convict a defendant. Cicero is serving as prosecutor against the infamously corrupt governor of Sicily, Verres. There are seven "In Verrem" speeches, but five were never given because Verres fled before the trial ended. "In Verrem I" is the first of these speeches. The next speech is "In Verrem II.5." It is the last of the seven speeches, the last of the five that were never given. It lists all of Verres's crimes in detail and was rather damning. This speech was later released to the public. "De imperio Cn. Pompei" is a 'deliberative' speech. It is given in the Roman forum and attempts to convince a group of people in a non-legal setting (typically legislative) to take a certain course of action. This speech was given during the second Mithridatic War. Mithridates, the king of Pontus, was at war with Rome over several territories. One of Rome's great generals, Pompey, had been leading the battle and he had to be renewed to continue legally leading Roman troops in battle. The speech argues in favor of retaining Pompey's command.

The next four speeches are all given within a week or two of one another. They are given when Cicero is consul and faces a conspiracy to overthrow the Roman government. A patrician, Catiline, and some of his allies, wish to take over Rome for themselves and elevate Catiline to consul (or even dictator). One of Cicero's greatest acts as consul was to quell this conspiracy. The famed 'Catilinarians' - the speeches Cicero gave on the occasion of the Catilinarian conspiracy - are some of the most famous orations in history. The eighth speech, "Pro Marcello" congratulates then dictator Caesar on pardoning his old rival Marcellus. Caesar had also lifted Cicero's exile; this was his first speech since his return. Finally, the ninth speech is "Philippic II," one of fourteen speeches where Cicero defends himself against vicious rhetorical attacks by Marcus Antonius. The Philippics round out Cicero's life, as Marcus Antonius eventually has occasion to have him murdered.