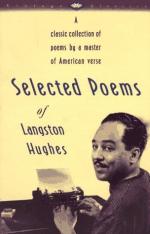 Langston Hughes
This Study Guide consists of approximately 35 pages of chapter summaries, quotes, character analysis, themes, and more - everything you need to sharpen your knowledge of Selected Poems of Langston Hughes.

The speaker entreats a young black boy in Harlem to "[take] just / One star." Taking a star is synonymous with reaching for something higher, more noble and outside the self in order to make one's dreams come true.

A black person comments on the way in which his/her music has been appropriated by whites for financial gain. The speaker comments on the phenomenon of "borrowing" black music for use in stage and film productions that are not about blacks, such as Bizet's opera "Carmen" and William Shakespeare's "Othello."

A young black child asks a carnival employee where the segregated rides are. The poet uses this vignette as a comment on the way in which many blacks simply assumed that segregation (also known as...

More summaries and resources for teaching or studying Selected Poems of Langston Hughes.