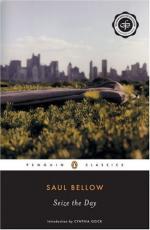 The third-person, limited omniscient point of view in Seize the Day provides a balanced view of the actions of the characters while offering some insight into the protagonist's mind. Thus Wilhelm is the central consciousness of the novel without being the narrator. The point of view of the novel recreates Wilhelm's frantic, disorderly state of mind while placing Wilhelm amongst his more orderly father and the rational Tamkin. A first-person narration by Wilhelm would prevent a balanced view of his father and other characters, as the world of the novel would be shaped by Wilhelm's internal turmoil. Yet a third-person narration that also accounts for Wilhelm's thoughts enables a controlled sequence of events while creating for sympathy for the protagonist.

New York City plays a crucial role as the setting for Seize the Day. The city itself, huge and teeming with infinite forms of activity...