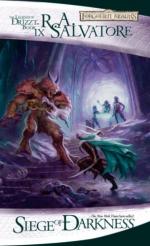 This detailed literature summary also contains Topics for Discussion and a Free Quiz on Siege of Darkness by Robert Anthony Salvatore.

The Siege of Darkness is a mystical novel of warfare and victory with a cast of characters which includes humans, drow, dwarfs and gnomes. Drizzt Do'Urden, a renegade drow who has just escaped captivity in the city of Menzoberranzan, unites with his friends in the dwarf city of Mithral Hall to conquer an invading drow army. While set in the mystical world of magic and the supernatural, this novel also incorporates meaningful statements about values such as friendship, trust, loyalty and faith.

The novel opens with Drizzt practicing swordsmanship with his human friend Catti-brie. Catti-brie was a central figure in Drizzt's recent escape from Menzoberranzan. When Drizzt left that drow city, a stalactite was severed and the Baenre House chapel damaged. The drow of Menzoberranzan worry they have lost their goddess's favor because of this damage. This fear is made worse with the sudden loss of magical powers. When the powers return, Matron Baenre, with the added power and approval of her goddess Lolth, kills a rival House Matron, then organizes forces to march to Mithral Hall. She plans to capture this dwarven city and kill the renegade Drizzt.

The dwarfs have prepared for the battle, however, and have a barrage of allies fighting on their side. While they fight courageously the dwarfs and their allies are saved from defeat only by the rising sun. The drow, who live in darkness, are terrified of the brightness of the light and quickly retreat. Meanwhile Drizzt and four other warriors find Matron Baenre and her daughters in a tunnel near Mithral Hall. A glitch in magic, provided by an angered tanar'ri, helps Drizzt and his friends overcome and kill the evil Baenre and her followers.

As the self-centered and power hungry drow battle the virtuous dwarves, a lesson is taught about the importance of community, friendship and love. Although the dwarfs and their allies have their differences they bind together to overcome the forces of evil. The drow of Menzoberranzan, however, work only for their own personal glory. It is this inability of the drow to bind together and fight for a united cause that leads to their demise.