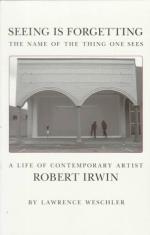 Seeing Is Forgetting the Name of the Thing One Sees: A Life of Contemporary Artist Robert Irwin Summary & Study Guide

Lawrence Weschler
This Study Guide consists of approximately 29 pages of chapter summaries, quotes, character analysis, themes, and more - everything you need to sharpen your knowledge of Seeing Is Forgetting the Name of the Thing One Sees.

Seeing Is Forgetting the Name of the Thing One Sees: A Life of Contemporary Artist Robert Irwin Summary & Study Guide Description

Seeing Is Forgetting the Name of the Thing One Sees: A Life of Contemporary Artist Robert Irwin Summary & Study Guide includes comprehensive information and analysis to help you understand the book. This study guide contains the following sections:

This detailed literature summary also contains Topics for Discussion and a Free Quiz on Seeing Is Forgetting the Name of the Thing One Sees: A Life of Contemporary Artist Robert Irwin by Lawrence Weschler.

"Seeing is Forgetting, The Name of the Thing One Sees - A Life of Contemporary Artist Robert Irwin" by Lawrence Weschler, is the life story of controversial artist Robert Irwin. Irwin is the first California artist to rise to a stellar position within the art world. The book chronicles Irwin from his modest beginnings in suburban Los Angeles through his journey of self-discovery in finding his place in the art world. He ultimately pursues the somewhat unrealistic goal of stripping objects of art down to a presence or indeed a perception.

As the son of working class parents, Irwin holds down jobs from beginning at a very young age, gaining a discipline and ethic that serves him well later in his art career. He is not a particularly good student in high school—his major passions are music and dancing, hot cars and girls. While his mother, like all mothers, fawned over his childhood artwork, there was no obvious sign that Robert was heading towards a career in art. Although his family did not frequent museums and he did not take private art lessons, at a very young age Irwin somehow knew that his future would be in the world of art.

After a stint in the military, Robert makes his future ambitions known and enrolls in art school. Early on, his instructors could see a raw and unique talent in his work. After finishing art school, he feels he learned much about technique and nothing about art. Irwin makes many long visits to Europe during the ten years following art school. He lives a solo life while there, sleeping in the day and walking the streets of Paris alone at night. He visits museums and dismisses much of the art he sees, including that of the masters. He lives on a Spanish island for eight months without once talking to another soul. Unwittingly, he is stripping his mind of preconceived notions and established ideals. Robert, on his own in Europe, learns what art is and what it is not—at least in his perception.

Back in California, Irwin begins a long association with the Ferus Gallery, a southern California entity that attracts many of his fellow contemporaries. Irwin contributes his success at Ferus to the relaxed atmosphere of the environment which allows him to develop without the constraints and pressure that exist in the undisputed US art capital in New York. It is at Ferus that Irwin makes a Zen-like connection to his art and challenges himself to bring that experience to viewers of his work.

Irwin focuses on painting lines, dots and discs for most of his early years as an artist. His goal in painting these objects is to have them virtually disappear into the canvas. His hope is that the object he paints is not a barrier to the viewer experiencing the "presence" of the work. Always on a quest of self-discovery, Irwin moves on to creating columns and works using light filtered through scrim. Some of his works are rooms with no obvious object of art—the room is the art. As Irwin gains more knowledge of himself and his own perceptions of art, he expands into teaching art students and into working with a physicist on experiments that present the concept that art can provide answers that logic is unable to supply.

Irwin's self discovery compels him to abandon his practices and techniques and to sell his studio and all his belongings in order to open himself up to what may be next. He even entertains the possibility that his career in art is over. In many visits to the desert he finds magic and energy that he then brings to his work. Through word of mouth, Irwin makes himself "available" at no cost to anyone who needs him. This offer eventually brings in many requests for lectures before art students and eventually large-scale projects and installations. He becomes enamored with the philosophy of phenomenology which addresses the dual challenge of becoming "reasonable" and "responsible." Irwin's philosophy includes the concept that perception is the foundation of everything else but that it also the most difficult to connect with.

In his later years, Irwin takes on the largest, most complex projects of his life. They are works that are installed mainly outdoors and that connect with nature. He has long abandoned having concern over whether his work is considered art or not. Art critics, through the years, have found difficulty in adequately labeling Irwin. At varying times he was considered an abstract impressionist and a minimalist and finally a pioneer in reductive progression—removing any "distraction" from the experience of perception. Robert Irwin maintained a unique approach to art, driven by an equally unique curiosity, throughout his entire career.

More summaries and resources for teaching or studying Seeing Is Forgetting the Name of the Thing One Sees: A Life of Contemporary Artist Robert Irwin.

Seeing Is Forgetting the Name of the Thing One Sees: A Life of Contemporary Artist Robert Irwin from BookRags. (c)2022 BookRags, Inc. All rights reserved.