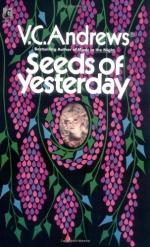 This detailed literature summary also contains Topics for Discussion and a Free Quiz on Seeds of Yesterday by Virginia C. Andrews.

Seeds of Yesterday is the final book in a series about the troubled Foxworth family.

The series begins with Flowers in the Attic, when Chris and Catherine's horrible mother banishes them to a life of neglect and abuse and keeps them locked in the attic of Foxworth Hall. Their younger twin siblings are also locked away with them. Their mother hides them because if her father knows of their existence he will disinherit her. It turns out that their father was also their half-uncle.

Throughout the book, Catherine talks about their family secret — the fact that her "husband" is really her brother — with mixed emotions. She does not want others to find out for fear of being ostracized. However, she thinks proudly about the love they share as if it is a truly special relationship. Catherine has had other lovers and has even been married to someone else in her past, but she believes Chris needs her more than anyone else, a thought that will even prevail at her death.

The family secret traps Chris, Catherine and their children together, even though none of the children were born of their relationship. Bart has the hardest time dealing with the conflict. As a child, he has deep psychological issues due to his mother's relationship with his uncle. As an adult, he wants more than anything for his mother to abandon Chris to redeem herself in the eyes of God.

The family returns to Foxworth Hall to celebrate Bart's 25th birthday. He is to inherit the family fortune the day after when attorneys arrive for a final reading of his grandmother's will.

However, Jory's injury and recovery take time so it is actually a month later before the final will is read and Bart learns of extenuating circumstances in his inheritance. Instead of inheriting everything at 25, he simply begins to collect $500,000 annually and Chris is still the trustee of the estate until Bart turns 35.

Jory, Chris and Catherine are all successful in their own rights. They can each certainly afford to move away from Foxworth Hall, but they choose not to do so. Instead, they remain under Bart's roof, dealing with his horrible temper and control issues.

Bart escapes his past when Chris dies in an auto accident. He realizes then that Chris really had tried to be a good father figure to him. When Bart becomes an evangelist, Jory remarries and Cindy's acting career is developing, Catherine decides that Chris needs her more and she goes to the attic to die. A servant finds her there, in an attic decorated with paper flowers.