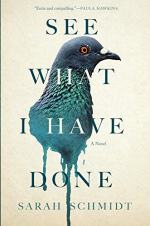 See What I Have Done Summary & Study Guide

Schmidt, Sarah
This Study Guide consists of approximately 55 pages of chapter summaries, quotes, character analysis, themes, and more - everything you need to sharpen your knowledge of See What I Have Done.

See What I Have Done Summary & Study Guide Description

See What I Have Done Summary & Study Guide includes comprehensive information and analysis to help you understand the book. This study guide contains the following sections:

This detailed literature summary also contains Quotes and a Free Quiz on See What I Have Done by Schmidt, Sarah.

The following version of this book was used to create this study guide: Schmidt, Sarah. See What I Have Done. Atlantic Monthly Press, 2017.

The novel opens with Lizzie Borden’s perspective as she discovers her father’s dead body in the living room. She quickly come to terms with his hacked apart corpse and has the family maid call for help. Lizzie falls into shock as the police are summoned and her step-mother’s body is found upstairs.

The story then jumps to Emma Borden’s point of view to detail what she was doing while her sister found their parents murdered. She has been away from home for two weeks, staying with a friend in Fairhaven, about fifteen miles from Fall River, Massachusetts, where the Bordens reside. She spends much of her time wishing to never return home, until she receives a telegram informing her of a terrible accident involving her parents.

The day before Bridget notes that Andrew and Abby Borden, who the reader knows will be murdered the following day, appear quite ill at breakfast. She goes about her chores during the day, cleaning a rug for Abby to prepare for guests Abby is anticipating while doing her best to not get caught up in the arguments between Lizzie and Abby that the audience learns are commonplace.

Meanwhile, Benjamin recounts how he met John, Lizzie and Emma’s uncle, who hired him to intimidate Andrew so that John could feel he lived up to his promise to his deceased sister to look after her children. John promises Benjamin $1000 to forcefully deliver a message to Andrew. The two take a train to Fall River that day.

Jumping back to the scene of the murders, Lizzie is informed by her maid and a family friend that they have discovered the body of her stepmother upstairs, despite Abby having been thought to be out visiting a sick relative. Lizzie gives answers to the police’s questions as they continue their investigation in the house.

The day before the murders, Bridget is surprised by John, who has arrived at the house unexpectedly. After serving the family tea, she spends her time performing various other chores. At one point, she hears an odd sounds and looks outside to see Andrew cutting the heads off of all of Lizzie’s pet pigeons.

After returning home because of the telegram, Emma enters the house to find police inside. They inform her of the terrible murders. Despite her shock and upset, she devotes herself to comforting Lizzie.

The previous day, Benjamin arrives in Fall River, where he and John head to the Borden’s house. He hides in the barn after spending the day observing John and the family. After the bodies have been moved to the dining room the next day, Lizzie explores the house, reliving past memories.

The morning of the murders, Benjamin awakes to Lizzie’s scream as she discovers her precious birds dead in the yard. He then sneaks into the house and watches the family as they argue. He passes out after getting sick from eating rotten meat and wakes up to find Abby’s hacked up body. He grabs a fragment of her skull from the bed and goes to hide in a crawl space in the barn loft, where he finds a bloody ax head. Later that day, Benjamin leaves Fall River with the skull fragment and the ax head, promising himself that he will return one day to collect what he is owed from John.

The morning of the murders, Bridget vows to herself to ask Abby to return the money she has saved from her wages to return home to Ireland. Abby has taken the money in an effort to force Bridget to stay as the family’s maid. Before she has the chance, she hears Lizzie calling out for her, indicating to the audience that the murders have happened.

The story jumps thirteen years to find Benjamin having kept track of the Bordens after leaving Fall River in the wake of the murders. Lizzie has been arrested, tried, and acquitted of murdering her parents. Benjamin believes that she now owes him money because he took the murder weapon and other evidence that might have pointed to her. He confronts the sisters at their new home and it is revealed, without being explicitly stated, that Lizzie perpetrated the murders. A neighbor spots Benjamin with the women and threatens to call the police, which causes him to leave without collecting any money.

The story then jumps back to the day of the murders, where Emma is wondering about what happened. When she questions Lizzie, Lizzie becomes agitated and Emma drops her line of questioning to appease her sister. She spends the evening trying to scrub her father’s blood from the living room carpet. Her next few days are filled with funeral planning. On the day of the funeral, Bridget, who has left the Borden’s employment after the murders, briefly stops by to give Emma flowers to put on Abby’s coffin. At the funeral, Lizzie recalls noticing blood on her hands before coming across her father’s body. The novel ends with Lizzie recounting a dream she has about her father while sitting next to him on their sofa before she raises her arms above her head.

More summaries and resources for teaching or studying See What I Have Done.

See What I Have Done from BookRags. (c)2022 BookRags, Inc. All rights reserved.