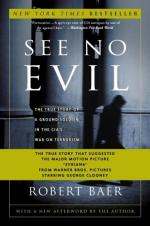 See No Evil: The True Story of a Ground Soldier in the CIA's War on Terrorism Topics for Discussion

What changes did Robert Baer see taking place in the CIA in the latter years of his tenure with them? What caused the changes? How did he react to them?

How did the US Government disappoint Saddam Hussein's opposition in their plans to overthrow the dictator? In what spot did their actions place Robert?

There are many terrorism links that lead to what Middle East figure? What award did this individual receive and why was it ironic? Why did he receive the award and with whom did he share it?

Who accused Robert Baer of plotting to assassinate Saddam Hussein? Who interrogated Baer about it? What penalties would he have faced had he been convicted of violating the laws that the he was accused of violating?

What was Robert Baer's first assignment with the CIA? What did he think it would be like and...