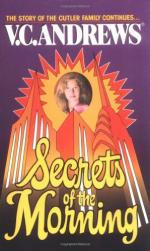 Virginia C. Andrews
This Study Guide consists of approximately 52 pages of chapter summaries, quotes, character analysis, themes, and more - everything you need to sharpen your knowledge of Secrets of the Morning.

Secrets of the Morning Summary & Study Guide includes comprehensive information and analysis to help you understand the book. This study guide contains the following sections:

This detailed literature summary also contains Topics for Discussion on Secrets of the Morning by Virginia C. Andrews.

The novel "Secrets of the Morning" by V.C. Andrews tells the story of Dawn Cutler, a lonely and abused teenager sent out to make a future for herself at a prestigious school for the arts in New York City. Even in New York, Dawn's abusive, revengeful grandmother causes problems for her by spreading lies. When Dawn gets pregnant by an opera star, her grandmother forces her to live in seclusion with an equally cruel aunt, and then arranges for the baby to be adopted. In a twist at the conclusion of the novel, Dawn inherits the controlling portion of her grandparents' estate after her grandmother dies of a stroke.

Revenge, family secrets, friendship, and the power that lies can hold over people are all themes in this novel. Although she does not realize it, Dawn is the result of a family secret that has caused a rift between her mother and grandmother. This discord caused her grandmother to "get rid" of Dawn by arranging to have another family "abduct" her. Dawn believed this family was her real family for years, a belief that leads to many of the problems that Dawn faces in the course of this novel. She has been reunited with her "real" family, the Cutlers, only to be shipped off to a boarding school so that her grandmother will not have to be around her. Dawn learns too late that her grandmother's hatred of her is because Dawn was born as a result of an affair between Dawn's mother and her grandmother's husband.

When Dawn's trust in a celebrity who promises to marry her and make her a big singing star leaves her pregnant and abandoned, Grandmother Cutler sends Dawn to The Meadows, the home of Dawn's aunt where Grandmother Cutler knows that the girl will be abused. Emily, who still struggles with the guilt that her mentally retarded sister got pregnant out of wedlock, treats Dawn as a prisoner and sinner. She tries to make Dawn have a miscarriage through rough treatment and medication. When the baby is born, Emily takes it away from Dawn because Grandmother Cutler has already arranged to have the child adopted.

Dawn's friend, Jimmy, arrives just in time to rescue her from her aunt at The Meadows and agrees to help Dawn locate her baby. Their search leads them to Cutler's Cove where Dawn's grandmother has just has a stroke. Grandmother Cutler's dying words to Dawn are: "You're my curse." Dawn learns when the will is read that she is the daughter of her grandfather, whom Dawn assumes was seduced by her mother. Dawn is also left the controlling portion of Cutler's Cove by her step-grandfather.

More summaries and resources for teaching or studying Secrets of the Morning.

Secrets of the Morning from BookRags. (c)2022 BookRags, Inc. All rights reserved.