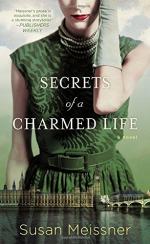 Secrets of a Charmed Life Summary & Study Guide includes comprehensive information and analysis to help you understand the book. This study guide contains the following sections:

This detailed literature summary also contains Quotes and a Free Quiz on Secrets of a Charmed Life by Susan Meissner.

There are no secrets to a charmed life, and one must learn to forgive himself for the choices he makes, a 93-year-old survivor of the London Blitz concludes in the novel “Secrets of a Charmed Life” by Susan Meissner. Before the Blitz began, Emmy Downtree was a bright-eyed 15-year-old with a dream to create perfect wedding dresses as a designer. Her dream seemed about to take flight when she made a choice that changed the course of her life and the life of her sister, Julia. The girls were separated during the first night of bombing in London. As Emmy dedicated her life to finding out what had happened to her sister, she dealt with her own grief and guilt, the consequences of the choice she had made.

Even though she and her sister had been evacuated to the country like the rest of London’s children, 15-year-old Emmy planned a trip back to the city to talk to a dressmaker about an apprenticeship. Emmy’s little sister Julia learned about Emmy’s trip and demanded to be taken along. Fearing that Emmy’s bridal sketches would separate her from her sister, Julia removed the brides box from Emmy’s satchel and replaced it with her book of fairy tales. The next day in London, things didn’t go as Emmy planned. On her way home from her appointment, the Luftwaffe began dropping bombs on London. By the time she was finally able to get back to her family’s London flat the following day, Julia was not in the flat where Emmy had left her. Emmy’s mother had not seen Julia either. Even though they searched hospitals and shelters, they found no trace of her. Julia’s mother left Emmy at the flat to wait for Julia while she went to meet with a man who she thought could help them find Julia. Emmy never saw her mother again. She was killed in the bombing that night.

Alone, Emmy took on the identity of Isabel Crofton, the deceased daughter of Eloise Crofton, the owner of a bridal shop where Emmy had worked. Because Isabel would have been nearly 18, her identity allowed Emmy to look for Julia without having to worry about getting sent to a children’s home because she was underage. Unfortunately, Emmy was still unable to find Julia. She returned to her foster mother, Charlotte, after she contracted pneumonia.

Meanwhile, the reader learns through a series of letters that Julia wrote to her sister at the request of a psychiatrist, that Julia had been found the first night of the bombings by her next-door neighbor, Thea. Thea found a letter from Julia’s father’s parents and contacted them. They took Julia in. Even though her grandparents tried to locate Emmy, they had no luck. Years later when Julia was faced with a wedding proposal from a man she loved but was scared she would lose, Julia worked with a psychiatrist who suggested she try to find healing by writing letters to her sister. In the course of her letter writing, Julia decided she needed to find her sister’s brides box and see if she could get a line of dresses based on Emmy’s designs.

During her search, Julia visited Thistle House and talked to Gwen, who was her niece, about the brides box. Julia had no idea she was related to Gwen during their first interactions. Even though the two weren’t able to find the brides box where Julia remembered putting it, Gwen was so moved by her story that she continued to look for the box and did finally find it. It was not until Gwen saw a picture of Julia in the newspaper wearing a dress based on one of Emmy’s designs that she told her mother about the lady who’d come by the house looking for the brides box. It was at this point the sisters were reunited.

The sisters’ stories are framed by an interview by Kendra, a history major studying in England for a semester. Although Isabel had never granted an interview up until this point, she agreed to talk to Kendra about her experiences as a survivor of the London Blitz. Following her interview, Isabel tells Kendra she has chosen the girl the share her history. She wants people to read her story and know that her mother mattered. She believes sharing her story will finally make her mother proud of her, a goal she’d hoped to achieve ever since her mother’s death.