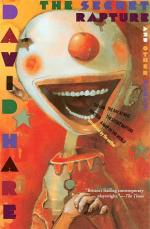 Additional Resources for The Secret Rapture by David Hare

David Hare
This Study Guide consists of approximately 83 pages of chapter summaries, quotes, character analysis, themes, and more - everything you need to sharpen your knowledge of The Secret Rapture.

Richard Eyre was the artistic director of Britain's Royal National Theatre from 1988 to 1997. He directed several of Hare's plays at the National during that time. This autobiographical collection of essays includes Eyre's thoughts on actors and the theatre, British politics, and the importance of social class in England.

This analysis of selected plays and films by David Hare, including his trilogy Racing Demon (1990), Murmuring Judges (1991), and The Absence of War (1992), suggests that Hare is one of the leading playwrights of Britain's post-World War II generation.

More summaries and resources for teaching or studying The Secret Rapture.

The Secret Rapture from Gale. ©2005-2006 Thomson Gale, a part of the Thomson Corporation. All rights reserved.