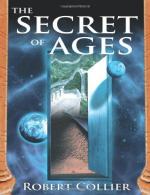 Chapter Fifteen, Part Five, is an essay written by Selwyn James about his Precious Gift from Conan Doyle.

Chapter Fifteen is an addition written not by Robert Collier, but by Selwyn James, and included in the original manuscript from 1926 in 1961. Mr. James recounts what his experience in the garden of Sir Arthur Conan Coyle at the age of seven did for him.

One summer evening, at twilight, Selwyn James, as a youngster, accompanies Sir Arthur Conan Doyle though his garden and learns from the great author of Imagination. The true nature of imagination is made clear to James, that it is nothing more and nothing less than the belief in the impossible. James recounts that his experience is on par with the great men who have visited the school of imagination, with Leonardo da Vinci who saw...