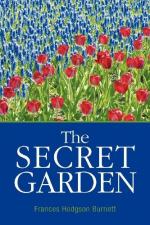 Frances Hodgson Burnett
This Study Guide consists of approximately 36 pages of chapter summaries, quotes, character analysis, themes, and more - everything you need to sharpen your knowledge of The Secret Garden.

This detailed literature summary also contains Quotes and a Free Quiz on The Secret Garden by Frances Hodgson Burnett.

The Secret Garden by Frances Hodgson Burnett is a story of rebirth as a result of the power of love. It opens with Mary Lennox, a 10-year-old girl who lives in India with her English parents. She is terribly neglected by them, causing her to be sickly, unpleasant, and demanding. When her parents die in a cholera epidemic, Mary is sent to live with her uncle, Archibald Craven, in Yorkshire, England. Mr. Craven lives in a huge manor house with nearly 100 rooms, most of which are unused since the death of his wife 10 years earlier, an event that has left him bereft. When she arrives at the Misselthwaite estate, the servants let her know that her uncle will pay no attention to her and that she is expected to get by on her own.

Soon after her arrival, Mary learns about a secret garden on the estate that has been locked away for 10 years. She becomes enchanted with the idea of the garden and determined to find it, and eventually she locates it and goes inside. It appears to be abandoned, but she finds a few sprigs of new growth and begins tending to them even though she knows nothing about gardening. Mary befriends Ben Weatherstaff, a gardener on the estate, and questions him about the garden, but he makes it clear that it is not to be discussed. She learns that the garden belonged to the late Mrs. Craven and her husband ordered that it be locked away after her death because it caused him too much pain. Mary also befriends Dickon Sowerby, the brother of her housemaid Martha, who is a great lover of nature and is beloved by every living thing, including every animal he meets, and he begins to help Mary tend to the garden.

After hearing the soft sound of crying from time to time in the house, Mary eventually discovers Colin, the sickly, demanding son of Mr. Craven, who remains secluded in his room and is not expected to live long. Mary and Colin are kindred spirits and when she tells him about the secret garden, he becomes determined to see it for himself. She brings Dickon to meet him and they conspire to take Colin to the garden in his wheelchair, but to keep it a secret from the adults in the house. Just as Mary has grown physically and mentally healthier by spending time in the garden, Colin immediately begins to transform when he enters it and declares that he will now live forever.

As spring comes, the garden begins to thrive along with the health of Colin and Mary. Soon Colin is able to stand and walk, but the children keep this a secret because he wants to surprise his father when he returns from his travels, hoping that his improved health will enable his father to love him. Unbeknownst to the residents of the manor, Mr. Craven has begun a simultaneous transformation as a result of the garden's spiritual power. When he returns to Misselthwaite, he is surprised to find that the garden has been discovered and is now thriving again and thrilled that his son, whom he has come to regret neglecting all these years, has now been made strong and healthy through his connection with nature and the power of love that comes from the secret garden.