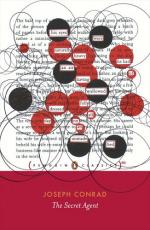 This detailed literature summary also contains Related Titles and a Free Quiz on The Secret Agent by Joseph Conrad.

The Secret Agent by Joseph Conrad, is a classic novel based on actual events, the attempt to blow up the Greenwich Observatory in 1894. The fictionalized tale revolves around a beautiful, young wife, her simple-minded brother, and her devoted but tortured husband. The novel is a mixture of love story, espionage, and mystery that continues to entertain many years after its original publication date.

The novel opens as Mr. Verloc, a storeowner, makes his way to an appointment at an Embassy in London. At this meeting, Mr. Verloc is revealed to be a secret agent for the French government and is accused of no longer being productive in this capacity. In the past, the Ambassador was a man who trusted Mr. Verloc completely. However, there is a new man in charge now. He is a man of action, who expects all in his employ to also be men of action. This man, Mr. Vladimir, suggests to Mr. Verloc that he create a situation to excite the emotions of the people of London, by setting off a bomb in some scientific place.

While Mr. Verloc struggles with the perceived threat in Mr. Vladimir's suggestion, his friends excite the emotions of his brother-in-law by discussing social reform in terms that the young man misunderstands. Stevie, Mr. Verloc's brother-in-law, is a simple young man who has had difficulty holding a job and now works exclusively in Mr. Verloc's pornography shop.

When a man blows up in Greenwich Park, a few of Mr. Verloc's friends become convinced that he has blown himself up. The police also are immediately suspicious of Mr. Verloc, ecause of a blue cloth found among the effects of the dead man. One inspector, Chief Inspector Heat, believes a recently paroled friend of Mr. Verloc's, Michaelis, is involved. He is determined to prove it, in order to continue to grow his well-respected reputation. His supervisor, the Assistant Commissioner, disagrees and decides to get involved in the investigation, himself.

Heat goes to Mr. Verloc, only to find out his supervisor has already been there. Heat learns the true identity of the dead man, and that Mr. Verloc was indeed involved. Heat suggests that Mr. Verloc leave the country immediately. The Assistant Commissioner, however, has already offered Mr. Verloc a deal in exchange for information that not only clears Michaelis, but also ends the tyrannical reign of Mr. Vladimir.

Upon learning of the death of her brother, Mrs. Verloc becomes nearly catatonic, as she listens to her husband explain everything that has happened. Mr. Verloc tells his young wife that the death of her brother is as much her fault as his, because she forced Mr. Verloc to spend time with Stevie. It's also her fault that Mr. Verloc's was caught by the police so quickly, because she didn't tell him about the labels she sewed into her brother's coat. Mrs. Verloc becomes homicidal and stabs her husband with a carving knife.