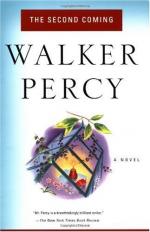 This detailed literature summary also contains Related Titles and a Free Quiz on The Second Coming by Walker Percy.

Will Barrett is depressed and contemplates suicide. He is convinced that life is meaningless and absurd, even as others routinely ask him for philanthropic donations from his vast personal estate. Although his golf game is excellent, he suffers from epilepsy and often has strange fugues and irrational ideas. Meanwhile, Allison Huger escapes from an asylum and makes her way to Will's area where she takes possession of a newly inherited greenhouse and large estate. As Allison tries to recover her memories and build a life, Will decides to commit suicide in a novel way - he will demand that God manifest His existence to save his life. A toothache interrupts Will's quest and, in failing health, he staggers into Allison's greenhouse. Over the next several weeks Allison takes care of Will while he falls in love with her. The two characters then decide to overcome their deficiencies by focusing on external events. As Will abandons his notion of suicide, Allison looks forward to a future full of love and commitment.

Will Barrett is exceptionally affluent and intelligent but he is lonely and severely depressed. He additionally suffers from epilepsy caused by a chemical imbalance that can be treated, albeit only with constant monitoring. Will's mental condition deteriorates through the early portions of the novel until he concludes that the only rational thing to do is to shoot himself. Meanwhile Leslie, Will's daughter, plans her marriage and worries about her father's apparent incompetence. Unknown to Will, Leslie begins to position herself as the guardian of his estate and plans to have him committed to a convalescent home that his fortune established and maintains.

Meanwhile, Allison Huger regains consciousness after a session of electroconvulsive therapy. She is an involuntary patient at Valleyhead Sanatorium and believes that the memory loss caused by the electroconvulsive therapy is more harmful than helpful. Over the course of several weeks, Allison plans an escape. Knowing that her plans will be forgotten she records them in a hidden notebook - the minute details are instructions to herself. One day she eavesdrops on a conversation between her parents and her doctor and learns that she has inherited a large estate from an eccentric woman who was a lifetime companion of Allison's aunt. She also learns that Allison's parents plan to have her declared mentally incompetent so they can dispose of the estate as they see fit. Several hours later Allison successfully executes her escape plan and travels to her newly inherited estate. She finds it decrepit and abandoned, but takes possession of an old greenhouse that she cleans and begins to repair.

As Will's mental condition continues to deteriorate, he determines to make his suicide count for something - his death will have a purpose. Will decides that he will hide inside of a local cave and starve to death; he will only leave the cave if God manifests His existence. Thus, Will believes, he will either prove or disprove the existence of God. Will's bizarre and patently ridiculous experiment is interrupted after several days by a toothache. Suffering from pain and nausea, he crawls from the cave and staggers into Allison's greenhouse where he collapses. Over the next several weeks, Allison nurses Will back to health and the two characters fall in love. Will admires Allison's ability and values her assistance, while Allison feels Will's unconditional acceptance completes her.

Will then goes back to town where he learns that his daughter has moved him into the convalescent home. He enters the home and spends several days, apparently drugged, watching television and sinking into a nearly mindless routine. Kitty, an old girlfriend, then accosts him. Kitty has recently discovered what has been happening between Will and her daughter, Allison. This encounter apparently awakens Will and he leaves the convalescent home, returns to Allison, and proposes marriage and a future of business and happy living. Allison quickly agrees and the two characters then have joyful sex, extended discussions, and look forward to a successful relationship. The novel concludes with Will attempting to secure the marriage services of an old priest.