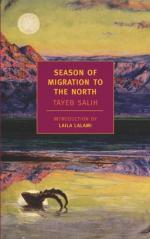 Season of Migration to the North - Pages 1-18 Summary & Analysis

Tayeb Salih
This Study Guide consists of approximately 27 pages of chapter summaries, quotes, character analysis, themes, and more - everything you need to sharpen your knowledge of Season of Migration to the North.

The narrator had been gone for seven years. He was happy to be back and they were happy to have him back. He had missed the closeness of tribal life during his stay in Europe. It was good to wake up in his own familiar bed with the familiar sounds of the wind outside.

The world seems unchanged to him as he has tea with his family while his father recites verses from the Koran. He had seen a strange man among those who came to welcome him home and asked about the man. He describes the man as around fifty, of medium height and graying hair. His father tells him that the man is Mustafa. He had arrived five years earlier and married the daughter of Mahmoud.

His family is curious about Europe and asks him many questions. What were...

More summaries and resources for teaching or studying Season of Migration to the North.

Season of Migration to the North from BookRags. (c)2022 BookRags, Inc. All rights reserved.