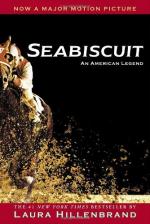 Seabiscuit: An American Legend is the first book-length work published by Laura Hillenbrand. While suffering from a debilitating illness, Hillenbrand wrote short pieces and feature articles for a variety of equestrian magazines before becoming captivated by the tale of Seabiscuit and the men who believed in him. She found that his story was a triumph over adversity that mimicked her personal predicament in many ways. Though nonfiction, the book pushes the reader forward using narrative elements more commonly found in fiction novels, as lives and situations intersect and diverge. The plethora of detail is a testament to Hillenbrand's thorough research.

The book takes place between 1929 and 1940, a period during which the world changed dramatically. In the United States, a stock market crash heralded the decade-long Great Depression that mired the country in despair and hopelessness. During those dark days, average citizens clung to even the smallest diversion that afforded hope or escape from their daily lives. An unlikely hero—a short, squat, and seemingly unfit racehorse—offered one such distraction, becoming a media darling and capturing the national imagination. In fact, in 1938, as the word teetered on the brink of World War II, the majority of news coverage was devoted not to politicians or warmongers but to one knobby-kneed horse nearly past his prime. Seabiscuit became a cultural icon, according to Hillenbrand, and offered hope to a generation of disadvantaged people: if he could overcome adversity and become a winner, so could they. From his initial outings in the dust of Tijuana to his grudge match with Triple Crown winner War Admiral, Seabiscuit epitomized the rags-to-riches American dream for millions of impoverished citizens who wondered whether the dream was still possible.

Although the horse became the focus of public attention, it was the convergence of the unique men contributing to Seabiscuit's success that piqued the interest of the media reports of the day, just as it is for Hillenbrand's book. The unlikely matching of a self-made business tycoon, a taciturn cowboy horse trainer, and a gangly, half-blind jockey rounded out the quartet that captured the hearts of an eager public, as well as the imagination of Hillenbrand.