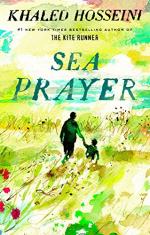 The story is narrated by an unnamed man who was born and raised in Syria. As a boy, he grew up in the countryside near the Syrian city of Homs. He lived in a farmhouse with his brothers and parents, and he enjoyed a boyhood of peace and contentment. He is now married and has a son named Marwan. The Syrian Civil War began when Marwan was a toddler. The narrator bemoans the fact that due to Marwan’s age, Marwan will likely have no memory of the few peaceful years following Marwan’s birth.

The Syrian Civil War was preceded by protests and civil unrest from the civilians. Eventually, the government began attacking its own civilians, and a violent civil war broke out. The war caused many deaths and immense damage to cities. The narrator eventually flees from Homs with his wife and son. They arrive at a beach on the coast of the Mediterranean Sea. There are other refugees there as well. Some are from Syria, but there are also refugees from other war-torn countries. As they wait for morning and the arrival of a rescue boat, the narrator thinks about the fact that previous refugees have often been treated hostilely by the denizens of countries to which the refugees have fled. His wife has said that if those people could witness the destruction of the war directly, then they would be kinder to the refugees.

In the morning, a relatively small, motor-powered boat arrives. The refugees crowd into the boat. The narrator has told his son that everything will be fine, but the narrator is aware that the journey is risky and could end in drowning. The narrator prays for the safety of his son. The story ends with an epigraph stating that the story was inspired by the death of a three-year-old Syrian refugee who drowned while making a sea journey very similar to the one described in the book. The epigraph also states that in the year following the boy’s death, over 4,000 more refugees died or went missing while trying to cross the Mediterranean Sea.