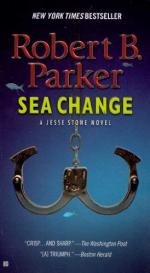 Robert B. Parker
This Study Guide consists of approximately 41 pages of chapter summaries, quotes, character analysis, themes, and more - everything you need to sharpen your knowledge of Sea Change.

This detailed literature summary also contains Topics for Discussion on Sea Change by Robert B. Parker.

Sea Change is a novel by award-winning mystery writer Robert B. Parker, who died in 2010. Published in 2005, the novel follows the investigation into the death of Florida heiress Florence Horvath by Paradise, Massachusetts Police Chief Jesse Stone. This is the fifth novel in the Jesse Stone mystery series.

When the badly decomposed body of a woman washes up in Paradise, Massachusetts during "Race Week," a month-long yachting event that attracts hundreds of yachts from all over the United States, Police Chief Jesse Stone starts an investigation. Jesse, who has been the Paradise Police Chief for seven years, has recently quit drinking and is in the process of trying to rebuild his marriage to his ex-wife Jenn. When Jesse learns that the victim is a Fort Lauderdale heiress named Florence Horvath who was popular in yachting circles, he begins to believe that there is more here than meets the eye. Enlisting the aid of Fort Lauderdale police detective Kelly Cruz, Jesse finds himself uncovering a world of non-stop wild partying, decadent sexual activity, drug and alcohol abuse, and criminal activity which leads him to believe that Florence Horvath was murdered.

Early in the case, Kelly Cruz finds a sex video in Florence's apartment in Fort Lauderdale which shows the heiress with two unidentified men. After getting a copy of the tape, Jesse has headshots of the men printed and shows them to the owners, guests, and crews of the yachts from South Florida in town for Race Week. A cabin on the Lady Jane, a yacht out of Miami, looks like the room where the Florence Horvath tape was shot but Harrison Darnell, who owns the yacht, and his guests say they don't recognize Horvath or the two men. The next day one of the guests tells Jesse that both men in the headshots had crewed on the Lady Jane, and that she and Darnell recognized them. Jesse later questions Corliss and Claudia Plum, Horvath's twin sisters, who claim to not recognize the men in the pictures and say that a friend of theirs told them about Florence's death.

The first real break in the case comes when a local underage girl claims to have been raped aboard the Lady Jane, which gives Jesse the legal grounds to search the yacht. During the search he finds that the entire boat has been wired to record video, and also finds videotapes which are very similar in content to the Florence Horvath tape. Meanwhile in South Florida, Kelly Cruz has been learning about Florence Horvath's wild lifestyle from her parents, Mr. and Mrs. Plum, and others who knew her. She also finds a connection between Horvath, Darnell, and the owner of another South Florida yacht in Paradise for Race Week, Thomas Ralston, who not only partied with Florence but also with her sisters the Plum twins.

Jesse locates one of the men in the Florence Horvath tape who tells him that Florence asked them to make the tape, and that the Plum twins had shot the video. After being confronted with their lies, the twins tell Jesse that Florence made the tape to send to Harrison Darnell to make him jealous. Realizing that the twins have lied throughout the case, Jesse starts checking out their story and learns from someone that knew both them and Florence that all three girls were wild, and that they all seemed to be hung up on their father. After Jesse relates this to Kelly Cruz, Kelly questions Kimmy Young, the young woman the Plum twins said told them that Florence was dead. She finds out that when Kimmy was 15, Mr. Plum had molested both her and the twins one night when she slept over at the Plum's apartment. Jesse confronts the twins with this knowledge and they tell him that Florence actually made the tape to send to their father. They also admit that they are afraid that it was their father who killed Florence.

After they are able to confirm that Mr. Plum was in Massachusetts around the time Florence was killed, Jesse travels to Miami and he and Kelly confront the Plums in their apartment. Mrs. Plum says that she has known about the abuse for years but didn't do anything about it, and accuses her husband of killing Florence. Mr. Plum finally admits to the crime, saying that he killed Florence in a jealous rage to keep her from becoming worse than she already was. He is taken into custody and Jesse goes back to Paradise and the relationship that he is building with his ex-wife.

More summaries and resources for teaching or studying Sea Change.