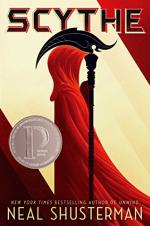 Neal Shusterman
This Study Guide consists of approximately 53 pages of chapter summaries, quotes, character analysis, themes, and more - everything you need to sharpen your knowledge of Scythe.

Scythe (Arc of a Scythe) Summary & Study Guide includes comprehensive information and analysis to help you understand the book. This study guide contains the following sections:

This detailed literature summary also contains Quotes and a Free Quiz on Scythe (Arc of a Scythe) by Neal Shusterman.

The following version of this book was used to create this study guide: Shusterman, Neal. Scythe. Simon & Schuster Books for Young Readers, 2016.

In a future in which nearly all forms of natural death had been eradicated, scythes gleaned, or killed, humans to control the growing population. Scythe Faraday, an old, well-respected scythe, recruited teenagers Citra Terranova and Rowan Damisch as his new apprentices. Citra and Rowan left behind their families, moved in with Faraday, and began their training for the deadly profession. Faraday trained his new apprentices to master various forms of weaponry and glean with compassion. Citra and Rowan grew to be close friends, even though they bickered with one another. Meanwhile, Scythes Goddard, Rand, Chomsky, and Volta conducted mass-gleanings, killing large numbers of people in public places and wreaking terror among the public.

At the Vernal Conclave, in which all the MidMerican scythes gathered to reflect on the previous few months, Citra and Rowan encountered many new scythes and observed the divisions that existed within the Scythedom. They faced the first test of their apprenticeship. Scythe Curie, the infamous Grand Dame of Death, administered their exam. She asked Citra about the worst thing she had ever done, but Citra lied when she said that she had pushed a girl down the stairs. After Citra failed her test, Rowan decided to purposely fail his own. When Curie asked Rowan about his greatest fear, he replied that he feared nothing. After this interaction, Scythe Rand, one of Goddard’s allies, proposed that the winner between Citra and Rowan would have to glean the loser at the end of their apprenticeship. High Blade Xenocrates, who presided over the MidMerican conclaves, accepted this proposal.

Citra and Rowan returned to Faraday’s home in a daze. They kissed, but did not want to continue their budding relationship any further, knowing that one would have to glean the other by the end of the year. The following night, Xenocrates informed Citra and Rowan that Scythe Faraday had gleaned himself in order to free them from their apprenticeship. However, Scythe Goddard decided to take Rowan on as his new apprentice and Scythe Curie took Citra on as well.

Citra moved in with Scythe Curie and began her training. Scythe Curie gleaned people who appeared “stagnant” in their lives, ending their lives quickly and painlessly. Citra took it upon herself to investigate Scythe Faraday’s death using the Thunderhead because she believed the true cause of his death was murder. At Scythe Goddard’s estate, Rowan suffered at the hands of Goddard and his allies, who turned off his painkilling nanites so he could feel the full brunt of his gruesome training. Goddard had Rowan practice gleaning on living people and accompany him to the chaotic mass-gleanings he executed. Rowan grew friendly with Scythe Volta, who was not ruthless like the others.

At the Harvest Conclave, Citra and Rowan reunited, but they had changed over their months apart. For their second apprentice test, Citra and Rowan had to battle in hand-to-hand combat. Rowan wanted to let Citra win, but she would not let him, so he brutally broke Citra’s neck to sever her trust in him. The Scythedom disqualified Rowan from the trial and sent Citra to a revival center.

High Blade Xenocrates accused Citra of murdering Scythe Faraday. Citra jumped off a building to escape from the Scythedom. The Thunderhead spoke to her while she was unconscious at the revival center and gave her a hint about Faraday’s final moments. Scythe Curie helped Citra escape to Amazonia, where she would be safe from the MidMerican scythes’ jurisdiction. Curie pointed her to an address where Citra found Scythe Faraday, who had faked his death. After recovering, Citra returned to Scythe Curie, who had freed Citra from any blame in the Scythedom.

Meanwhile, Rowan’s training under Scythe Goddard became more brutal. Scythe Goddard and his disciples decided to exceed their gleaning quota. They targeted a Tonist colony. Scythe Volta gleaned himself after gleaning a classroom full of children. Goddard gave Rowan his ring to glean the Tonist curate. However, instead of gleaning the curate, Rowan killed Goddard, then Rand and Chomsky as well. He took Goddard’s robe and ring and left the scythes to die in the burning building.

On the night before the Winter Conclave, Citra and Rowan both completed their final apprentice test. Citra had to kill her little brother Ben, as Rowan had to do with one of his loved ones as well. The Scythedom named Citra the victor and ordained her as Scythe Anastasia. Instead of gleaning Rowan, Citra punched Rowan in the face while wearing her new scythe ring, granting him one year’s immunity. After confessing their love for one another, Citra helped Rowan flee the conclave, into a waiting car with Scythe Faraday.

More summaries and resources for teaching or studying Scythe (Arc of a Scythe).

Scythe (Arc of a Scythe) from BookRags. (c)2022 BookRags, Inc. All rights reserved.