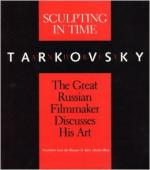 Sculpting in Time: Reflections on the Cinema Summary & Study Guide

Sculpting in Time: Reflections on the Cinema Summary & Study Guide includes comprehensive information and analysis to help you understand the book. This study guide contains the following sections:

This detailed literature summary also contains Topics for Discussion and a Free Quiz on Sculpting in Time: Reflections on the Cinema by Andrei Tarkovsky.

Sculpting in Time collects the theoretical writings of Russian filmmaker Andrey Tarkovsky. Tarkovsky expresses his views on the nature of art and cinema, and provides some insight as to his films.

In his introduction, Tarkovsky states that he has written the material in the volume over a period of years, and was initially inspired to write because of letters from fans. Some fans expressed puzzlement or curiosity as to what Tarkovsky had tried to attempt to communicate in his films. Underwhelmed by existing critical literature, Tarkovsky embarked on his own attempt to define such things as art and cinema, and to comment on his films.

Cinema, as its core, is the capture of reality over time. At its heart is careful observation of reality. The artist brings his own unique reality and worldview to a film, creating a prism through which objective reality is filtered. The artist must depend on his own experience, feelings, and thoughts in crafting a cinematic work.

A cinematic masterpiece (and Tarkovsky doubts that cinema, in its relative infancy, has even had a master yet that future generations will look to) is characterized by its organic wholeness, with every element of the picture (sound, acting, lighting, shot selection, etc.) working in perfect harmony.

The basic element of cinema is rhythm. The director brings his own rhythm to a picture, as do the subjects photographed as well as the editing imposed upon the footage.

Reality should always be the first virtue of the filmmaker. Artifice, in the form of theatrical acting, overly symbolic or literary intention, or gimmicky effects, should be avoided at all times. The "mise-en-scene," the design of a scene to be shot, should be free to be realistic rather than manufactured. Similarly, film acting should strive for in-the-moment psychological truth, and should never borrow from theatrical acting.

The artist battles against several factors which would seek to dilute his artistic vision. These include the hardships of production, the interference of creative crew members, and the pressures of being commercial. Commercial cinema and artistic cinema can never be the same, and the true artist eschews the easy money of commercial success in order to stay faithful to his uncompromised vision. The artist should not cater to the perceived expectations of his audience; however, he does have a moral responsibility to those audience members who respond to his work. This moral responsibility takes the form of the sharing of personal experience, and a faithfulness to self no matter what.

Art, in a broad sense, is spirituality. It seeks to awaken the spirituality of the spectator, to uplift them, to make them feel more alive. The modern world, with its material comforts and technology, is in desperate need of the spiritual awakening promised by great art.