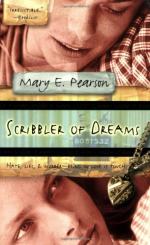 This detailed literature summary also contains Topics for Discussion and a Free Quiz on Scribbler of Dreams by Mary E. Pearson.

"Scribbler of Dreams" is a young adult novel written by Mary E. Pearson and published in 2001. Told in the first person narrative by main character Kaitlin Malone, the novel tells the story of her love for Bram Crutchfield in a Romeo and Juliet-like fashion. Kaitlin's family and Bram's family have hated each other for five generations, stretching back to a falling out between the Crutchfield sisters, Maggie and Amanda.

Kaitlin falls in love with Bram in school, unaware at first that he is a Crutchfield. She lies to him about her last name, telling him it is Hampton and not Malone. Yet for all of his gentleness, Kaitlin can tell that Bram has severe hatred for the Malones. Bram blames Kaitlin's father for the death of his own father, and Kaitlin knows that her father had nothing to do with the death.

Kaitlin uncovers a plot by the Malone farm foreman Rick to poison the tomato crop, thereby forcing the Malones to sell land to the Crutchfields. Rick then in turn exposes Kaitlin as a Malone to Bram and the Crutchfields, who shun Kaitlin. In the end, Bram's love for Kaitlin overpowers his hatred for her family and the pair hope to begin a new era of peace between the families.