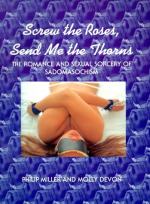 Screw the Roses, Send Me the Thorns: The Romance and Sexual Sorcery of Sadomasochism Setting & Symbolism

Philip Miller and Molly Devon
This Study Guide consists of approximately 32 pages of chapter summaries, quotes, character analysis, themes, and more - everything you need to sharpen your knowledge of Screw the Roses, Send Me the Thorns.

Sadomasochism is the term used to categorize activities enjoyed by sadists and masochists. These activities involve a power exchange during sexual encounters between consenting adults in which one individual plays a dominant role and the other plays a submissive role. The activities performed include bondage, discipline, punishment, restraint, humiliation, and overall sexual control.

Bondage is the practice of securing an individual in an effort to restrict movement. In SM, this is achieved using ropes, harnesses, scarves, cuffs, or other devices.

A 'dungeon' in SM is any area furnished in such a way as to provide a safe, private, and secure area for SM scenes. Dungeons can be complete basement romp rooms, or simple alterations of a couple's bedroom.

A whip is any device use to beat a submissive. These devices can include canes, crops, paddles, slappers, and leather whips.

A masochist is an...

More summaries and resources for teaching or studying Screw the Roses, Send Me the Thorns: The Romance and Sexual Sorcery of Sadomasochism.

Screw the Roses, Send Me the Thorns: The Romance and Sexual Sorcery of Sadomasochism from BookRags. (c)2022 BookRags, Inc. All rights reserved.