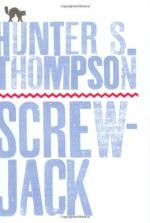 This detailed literature summary also contains Topics for Discussion and a Free Quiz on Screw-jack by Hunter S. Thompson.

Screwjack is a collection of three short stories by infamous journalist Hunter S. Thompson. Though unrelated narratively, the three stories titled, "Mescalito," "Death of a Poet," and "Screwjack" could be said to share the common theme of drug abuse and addiction.

The longest story, "Mescalito," involves Thompson's mescaline drug trip during a stay at a Los Angeles hotel in February 1969. Thompson was crushed by writer's block at the time, and pressured by his newspaper to produce material. He was smoking marijuana and taking Dexedrine pills for energy. He ran out of Dexedrine pills, and the only pills he had left with enough "kick" for his drug habit were a mixture of speed and mescaline, so he consumed those pills late one night.

A few hours later, Thompson began to experience the results of the mescaline on his brain and body. He felt weightless, and like he was vibrating. Then his muscles spasmed and went cold. He found it difficult to move around the room, and he felt exceedingly thirsty. At the worst part of Thompson's drug trip, Thompson became convinced that the cleaning ladies were trying to get into his room, and he hallucinated that he could hear the doorknob jingling.

Thompson's acquaintance Oscar arrived, and soon the worst of Thompson's drug trip had passed, to the point he was able to board a plane to Denver. However, lingering effects of the mescaline impacted Thompson's time on the plane - he thought the plane was tilting - as well as his time in the Denver airport.

"Death of a Poet" involved a narrator arriving in Green Bay right after the football Packers had lost a big game. The town was crushed. Thompson visited his friend F.X. Leach in a trailer park, and Leach confessed he had bet for the Packers and was financially ruined. The narrator found a naked woman lying in the kitchen, but Leach showed him it was merely a blow-up doll. Leach was able to save his marriage by beating on his dolls instead of his wife. At that point, police tried to knock the trailer home's door down, and Leach took a gun and fired a few shots through the door, before turning the gun on himself and taking his own life.

The last story, "Screwjack," involves a letter by Raoul Duke which expresses a love/hate relationship Duke had with a tomcat named Mr. Screwjack. Duke and Screwjack appeared to be passionate lovers who vacillated between intense bouts of lust and hatred. Duke kissed Screwjack passionately one night, and then tossed him out of his home. Duke begged God for forgiveness for his transgressions in loving Screwjack, but at the same time defended his relationship.

After this Duke letter, another narrator (who had been reading the letter) discovered to his horror that he had struck up a similar relationship with Screwjack. The narrator stroked Screwjack, and Screwjack bit him. The narrator squeezed Screwjack hard, trying to kill him, but Screwjack was unharmed, ending the story curled up beside the refrigerator.