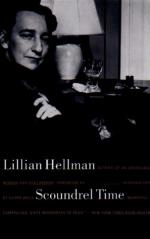 The investigation of private citizens about their alleged un-American activities is generally referred to as "McCarthyism." What politician actually created the environment of mistrust that led to McCarthyism?

Why did Lillian Hellman believe that the mentality of the House Committee on Un-American Activities actually originated with the Russian Revolution of 1917?

Richard Nixon was a member of the House Committee on Un-American Activities. What role did he play and how did Hellman view his actions and motivations?

After World War II ended, President Truman launched the Cold War. How was fighting the Cold War connected to the investigation of private US citizens?

What signs existed after peace was won in World War II that America was not gearing down its wartime posture?

When Lillian Hellman testified before the House Committee on Un-American Activities in May of 1952, why was she dismissed without punishment?