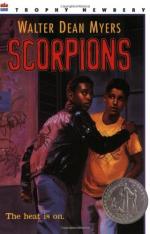 Walter Dean Myers
This Study Guide consists of approximately 47 pages of chapter summaries, quotes, character analysis, themes, and more - everything you need to sharpen your knowledge of Scorpions.

"That was the way Tito was. He got nervous sometimes, but he wouldn't let you down." Chapter Four

"Jamal had looked at Randy. He was looking cool. Jamal hated that. You weren't supposed to be looking cool when you made your mother cry." Chapter Four

"'But if I'm in the Scorpions, maybe we can get them to do some good things, too.'

"'And we can look out for each other."' Chapter Seven

"Jamal felt the same about his father as he did about Randy. They were both gone, and each of them had taken a little piece of Mama with them that they couldn't bring back." Chapter Eight

"He hated it when his father came and talked about 'straightening him out.' It wasn't like he was there all the time to talk to him or help or...

More summaries and resources for teaching or studying Scorpions.