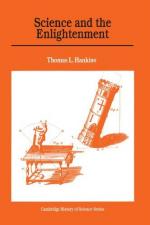 Thomas L. Hankins
This Study Guide consists of approximately 29 pages of chapter summaries, quotes, character analysis, themes, and more - everything you need to sharpen your knowledge of Science and the Enlightenment.

Science and the Enlightenment Summary & Study Guide includes comprehensive information and analysis to help you understand the book. This study guide contains the following sections:

This detailed literature summary also contains Topics for Discussion and a Free Quiz on Science and the Enlightenment by Thomas L. Hankins.

At the outset of the Enlightenment, thinkers were beginning to rebel and move beyond the stifling dogma of Aristotelian thought that had been enforced by the Catholic church since the 11th century. It is no surprise that Enlightenment thought grew out of the work of two Englishmen, who lived in a land that had divorced itself from the Catholic Church. It was Newton and Bacon who developed many of the ideas that led to the Enlightenment both advocating the adoption of the inductive method of observation and theorizing and making a radical break from any reliance on religious revelation or on Catholic philosophy. These initial developments in England led to ripples on the continent of Europe, especially in France and Germany.

Until the development of more sophisticated mathematical tools, pure math would have to wait until the 19th century for more advancement. The Enlightenment did see a development in experimental physics, however. Newton contributed to this field greatly as did other scientists. Although many of their theories were ultimately incorrect, the work in this field did lead to many practical developments in the field of electricity and heat research.

It was chemistry, however, that was affected the most by new developments during the Enlightenment. Previously chemistry was the province of Alchemists and doctors, but the Enlightenment saw the development of chemistry as an independent and important field of science. Geniuses like Boyle and Lavoisier developed theories that helped to demolish the old Aristotelian theory of elements and to establish the molecular theory of gases and liquids.

Natural history, or what we might call Biology, and physiology were also created as independent field in this era. While mechanists and vitalists battled it out in the theoretical realm, scientists such as Linnaeus quietly put together the foundations of modern biology and physiology.

Great as these developments were, it was the development in the moral or what we might call the social sciences which were the most influential. Philosophers like David Hume, Rousseau, and Montesquieu developed theories of human nature and law that are still with us today. The Physiocrat in France developed a natural theory of economics that Adam Smith used as the basis of his own theory of economics. Men like Condorcet used the new mathematical techniques to found a quantitative social science and ethical theorists attempted to discover the natural root of our ethical theories and sentiments. In all these ways, this book shows the development of these fields and the birth of modern science out of the ashes of Scholasticism and ignorance.

More summaries and resources for teaching or studying Science and the Enlightenment.

Science and the Enlightenment from BookRags. (c)2022 BookRags, Inc. All rights reserved.