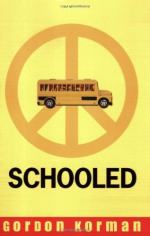 When 13-year-old Capricorn Anderson's grandmother breaks her hip, he has to move out of the hippie commune they live in and into the real world. Initially, he struggles. The children make fun of him and he is generally clueless about life beyond the commune. Slowly however, his affable personality wins people over. By the end of the book he is his school's most popular kid.

Cap Anderson has been arrested by the police for driving without a license. To their surprise Cap has no idea what they have talking about. He tells them he was driving his grandmother to the hospital after she broke her hip falling out of a tree. He lives and is schooled by her on a commune called Garland and neither understands the concept of a license nor knows the emergency number 9-1-1. Eventually, the police let him go to see his grandmother Rain in hospital.

Rain is distraught. She tells the nurses that she cannot go in hospital for two months because she has to look after her grandson Capricorn. He has no one else and she hates the idea of him being contaminated by the real world. The doctors tell her she has no choice and they will have to call the social service to find him a home and a school until she gets better. Luckily for both Cap and Rain the social worker given Cap's case is a lady called Mrs. Donnelly. Brought up on Garland herself, she understands what Cap must be going through and invites him to stay with her at her house.

Cap's first few days at school are a nightmare. The first person he meets is the school bully Zach. From his clothes and lack of social understand, Zach can see Cap is the perfect target for him and his other friends. The school has a tradition of voting the weakest kid in as President so eighth formers like him can make fun of them and manipulate them to do as they please. The last two presidents had to leave school early due to nervous breakdowns. Zach views Cap as perfect president material.

Cap tells Rain that he is not happy at his school. People are violent and have no time for anyone. He wants to go back to Garland. Rain is sympathetic. She tells him that the outside world is an unforgiving place and he should feel sorry for anyone that cannot love like he can. She also expresses guilt. She thinks she should have exposed Cap to the real world sooner.

Cap is voted in as president. Everyone is happy, particularly Hugh Winkleman who knows it would have been him and not Cap who would have been voted in if Zach hadn't noticed Cap so soon. Zach and his friends Daryl, Naomi and Lena are having a great time sending Cap on wild goose chases. One day Cap finds a dead bird in his locker. Upset, he takes it takes it to the garden and buries it in the flowerbed. As he stands over the grave, he is joined by other children including Naomi who secretly wishes that Zach could show as much sensitivity as Cap. Zach looks on from inside the school, in anger.

Cap's homelife is no better. Mrs. Donnelly's daughter Sophie hates him even pouring water over his head when he practices tai-chi on the lawn outside. To Sophie, Cap is an embarrassment. Cap responds in his usual affable manner, but the abuse just continues. Mrs. Donnelly tells him Sophie is partly behaving so badly because of her father and Mrs. Donnelly's ex-husband is always making promises to her he can't keep. Most recently he forgot to show up for their driving lesson. That gives Cap an idea. While Mrs. Donnelly is out, he gives Sophie a driving lesson in Mrs. Donnelly's car.

Meanwhile Cap's popularity at school rises two-fold. One day on the school bus the bus driver Mr. Rodrigo keels over, sending the bus veering towards a dump truck. Cap responds immediately, pulling Mr. Rodrigo off of his chair and steering the bus away from the truck. Despite his arrest at the hospital, the students hail him as a hero and begin helping him out with his duties as president. In particular everyone is keen to help out with the Halloween bash. Even the principle Mr. Kasagi gives him 12 blanks to pay for everything. However, he tells Cap, he must use the checks responsibly. Cap has no idea what he is talking about until he remembers what Rain once said to him: being responsible is helping others. With the checks Cap buys and engraves a bracelet for Sophie, pretending it is from her father and donates money to lots of charities, including $1000 to Naomi's charities. His generosity makes him even more popular.

The only two people unhappy with Cap's new found celebrity status is Hugh and Zach. Despite hating each other, they decide to get together and plot Cap's downfall. Their first idea is to persuade Cap to dress up in the opposing team's kit during the pep rally and send him out onto the pitch. It works perfectly. As soon as Cap steps onto the field the Calverage players all charge him with Zach's friend Daryl at the front. They only realize he is not a footballer player when his frail crumbles under their weight. Later, Daryl, realizing Zach was responsible, approaches him in the corridor. Zach laughs at him and Daryl unable to compete with him in an argument of words raises his fists to punch him. Unfortunately Cap has stepped between them and his punch lands directly on Cap's nose.

An ambulance arrives for Cap, but it is not to take him to hospital. Rain has arrived at the school to take him back to Garland. Cap has mixed feelings. Though he misses Garland, he was beginning to enjoy his life at Claverage. When they arrive back at commune Cap feels a bit depressed. Compared to the outside world, Garland is very dull.

Meanwhile the students think Cap has died, blaming Zach and Hugh for his death. Both Zach and Hugh think they are ridiculous, but if Zach in particular is going to get back his popular status he needs to take advantage of the situation. With Hugh he decides to arrange a memorial service for Cap in the school car park.

Sophie is doing her driving test when it occurs to her that the bracelet she thought her father sent her was not from him, but from Cap. All the things she said and did to him and all he did was respond in kindness. As soon as she passes her test she drives to Garland, determined to take Cap to the Halloween Bash. Cap has had the same idea and a few miles from the commune they meet each other. Jumping into Sophie's car, they drive to Claverage High School.

When they arrive at the school, Sophie and Hugh are shocked to see everyone in the car park holding candles and dressed in hippy clothes. Before long they see Zach step onto the stage, asking people to come up to give their tributes to Cap - the best school president Claverage has ever had. One by one and tearfully they all give small speeches until finally Cap comes forward to reveal he is still alive. Everyone goes wild and Daryl steps forward to lift him through the crowd. At the back of the crowd is Rain, observing everything.

A couple of days later Cap is at working on the commune by himself when a white Mercedes pulls up and out steps Rain. Stylishly dressed and with a mobile phone, she tells Cap that she has sold Garland for $17 million, bought a condo in the city and enlisted Cap at Calverage High School. She insists, however, she has not sold out. They will mostly use the money to help others.