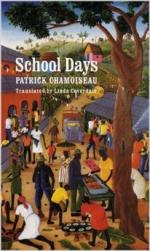 Patrick Chamoiseau
This Study Guide consists of approximately 55 pages of chapter summaries, quotes, character analysis, themes, and more - everything you need to sharpen your knowledge of School Days = Chemin-d'ecole.

School Days is the story of the author's first year at school on the Caribbean island of Martinique. The little boy longs for school, but when he finally gets to go he finds that it is not what he hoped. At school he is expected to cast off everything Creole to embrace the French language and culture, which is supposedly the culture of his "betters." He is made to feel ashamed of Creole. Eventually, his teacher gives up on all but his favorite students, treating the others with undisguised racism. The little boy only manages to survive his school years by discovering his passion for books and literature.

The little black boy longs to go to school so that he will not be left out. He has seen his older siblings go and wants to join them. His mother buys him a satchel to quiet him down, and he uses the chalk inside it to draw all over the communal hallway in the apartment building. When he finally does get to go to nursery, the little boy is thrilled. He soon finds that he loves learning, singing songs and reciting the alphabet. He loves pleasing his nursery teacher, Mam Salinière, by impressing her with the things he has learned.

However, one day his older brother lets slip that he does not actually go to a proper school. Suddenly the little boy feels left out again, and so, to his mother's consternation, he begins to beg for school once more.

Eventually the boy's wish comes true, but he soon finds that school is not what he thought it would be. The teachers are cold and unsupportive, and he is expected to speak French. He is told that the Creole culture is barbaric and that he needs to leave it behind to embrace French culture instead. The Teacher shouts at and whips any boys who make mistakes in their French, and soon the pupils are too frightened to use either French or Creole. They remain silent in class whenever possible. It soon becomes apparent that the Teacher has his favorites and that he is unashamedly racist in choosing them.

As the teachers try to tell the children about European fairy tales and French culture, in the playground Big Bellybutton tells them about Creole magic and zombies. When the teachers introduce powdered milk from France in an attempt to combat "malnutrition," the children throw their milk into nearby streams as they tell each other stories about the magical Creole ingredients the adults must be putting in it. The children try to use Creole sorcery to curse their Teacher and believe that they have managed it when he takes time off ill. A substitute teacher comes in, who tries to tell them about their African roots and make them proud to be black. The children do not understand his world view any more than they do their normal teacher's.

Eventually, the Teacher gives up on all but his favorite pupils. Big Bellybutton has also given up, and so would the little boy, if he hadn't discovered his love of books and literature. This gives him the drive he needs to keep paying attention in school. He is motivated by the desire to read and write books one day. This drive is what helps him to survive his school days.