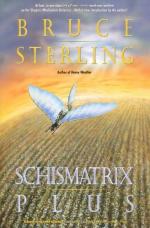 Bruce Sterling
This Study Guide consists of approximately 56 pages of chapter summaries, quotes, character analysis, themes, and more - everything you need to sharpen your knowledge of Schismatrix Plus.

Schismatrix Plus Summary & Study Guide includes comprehensive information and analysis to help you understand the book. This study guide contains the following sections:

This detailed literature summary also contains Topics for Discussion and a Free Quiz on Schismatrix Plus by Bruce Sterling.

The desire for longevity and immortality gives the Mechanists a great deal of power as they artificially reproduce the portions that refuse to last as long as the mind. Eventually, this extends to the mind as well. Mechanists become wired, trading their organic minds for a wired version that no longer requires the body to survive.

For Shapers, it is the final blasphemy, and the stage is set for a struggle that will last lifetimes, pitting one side against the other. Shapers are the alternative to natural birth. Created in sterile environments, Shaper children are brought to life using DNA cloning techniques and are raised by inorganic instructors who see to their educational needs. Their genes are maximized for intelligence and will one day spawn the first of the ReShapers, whose inception is a product of a desire for even more intellect. Both sides are convinced that their way is the key to humanity's future and their ongoing feud lasts until the first visit from the Investors.

The Investors are the first of nineteen other intelligent beings who make their presence known. They are one of only two species that are capable of faster than light travel, and they are the only intelligent species with this advantage. As such, it is a closely guarded secret. The self-named Investors travel from one species to another, trading trinkets and small gadgets for minerals and valuables. They are reptilian in appearance, and seem to have unlimited powers. They are ancient, and in fact are so old that they remember nothing before the starships they now travel in. They give just enough to amuse but not enough to ensure a future threat.

Despite this, factions compete for their favor, and all rejoice that the Investors are a benign race. Trade flourishes, and war becomes crass and vulgar. Years pass.

Schismatrix Plus follows the life and times of one man, a Shaper who is sent into exile and is given political asylum on Zaibatsu. Abelard Lindsay takes on the first of many identities here, and prospers. His adventures will include many cliques and many roads to riches, but none as ambitious as the one he takes on as his finale.

Towards the end of his life, Lindsay finally understands the value of life itself. His final project involves a covert trip to the planet Earth, where the oceans teem with life forms undisturbed for centuries. With a generous sampling of as many living forms as can be collected, they return to Mars, where oceans now await. Then, old and tired, he sets out on his last adventure, shedding his mortal body for a union with a Presence as yet unknown by almost all.

More summaries and resources for teaching or studying Schismatrix Plus.

Schismatrix Plus from BookRags. (c)2022 BookRags, Inc. All rights reserved.