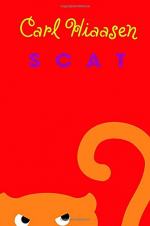 Carl Hiaasen
This Study Guide consists of approximately 63 pages of chapter summaries, quotes, character analysis, themes, and more - everything you need to sharpen your knowledge of Scat.

This detailed literature summary also contains Quotes and a Free Quiz on Scat by Carl Hiaasen.

SCAT begins as Nick is in his biology class with his friend Marta. Their biology teacher, Mrs. Starch, is the most feared teacher in the school. She is looking for a student to answer a question. She finally descends upon a boy named Duane, whose nickname is Smoke. The student and Mrs. Starch have a conflict that ends with him threatening her, eating her pencil, and leaving.

The next day, the class goes on a field trip that Mrs. Starch has organized. Smoke is absent. Nick is excited because he hopes to see a panther, an endangered species in Florida. The field trip is cut short when there is a wildfire. The students gather and go back to school, but Mrs. Starch goes back into the swamp to find a student’s inhaler. She does not return to the school, and she is not at home. Everyone thinks that she is still in the swamp, but the inhaler later appears at the student’s house.

Even though this happens and the school’s headmaster, Dr. Dressler, receives a letter saying that she has taken time off due to a family emergency, no one believes this is true because she does not have a family. The police drop the missing person case, thinking that Mrs. Starch is suffering from burnout. After determining that the wildfire is a case of arson, the authorities remain interested in it. Although they cannot prove anything, the authorities suspect that Smoke started the fire because he was mad at Mrs. Starch and he has a history of starting fires.

However, the authorities do not know that an oil company is illegally drilling in a wildlife preserve. The company set the fire to keep curious children from discovering the work the company is doing. In addition, the area really is a panther’s habitat and the company has also been trying to scare the panther away as their project could be shut down as a result of the animal living there. On top of that, the panther has had cubs which is relevant because that is why Mrs. Starch is missing. When she went back to the swamp, an environmentalist named Twilly saved her from the wildfire and then asked her to stay to serve as a surrogate mother to the one cub he was able to save. As she has a soft spot for endangered species, she stays.

Nick and Marta discover this as a result of their continued investigation of Mrs. Starch’s disappearance. Nick was glad to start the investigation to take his mind off the blast that has caused his father’s return from Iraq as an amputee. The children also discover that Smoke is helping Twilly track the mother panther because it is important to unite the two soon, or else it will be too late. The group bands together, and one morning they go to look for the mother panther.

On the same day, the owner of the oil company (Drake McBride) and his project manager (Jimmy Lee Bayliss) are in the swamp because Twilly has notified officials that he has seen poop (or SCAT, in this case belonging to a panther) near their drilling site. The two men are there to meet an official and know that their illegal activities are about to be discovered. Neither group knows that the other is there. The two men also see the panther, and Drake McBride shoots at it. The bullet injures Mrs. Starch. Twilly and Smoke take Mrs. Starch to the hospital, leaving Nick and Marta to reunite the cub and its mother. At the same time, the detective and the arson investigator arrive on the scene. They have figured out that Jimmy Lee Bayliss set the wildfire. They arrest Bayless, but Drake McBride runs, only to later be turned in by his father. As the narrative ends, Mrs. Starch returns to the school, and the students appreciate her. Nick, Marta, and Smoke are heroes for reuniting the panthers. Nick’s father now has a prosthetic right arm. Nick and his parents go on a fishing trip. Ironically, they cross the path of Twilly who left the swamp once his “job” there was complete.

More summaries and resources for teaching or studying Scat.