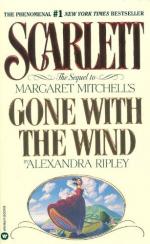 Scarlett: The Sequel to Margaret Mitchell's Gone with the Wind Summary & Study Guide

Alexandria Ripley
This Study Guide consists of approximately 45 pages of chapter summaries, quotes, character analysis, themes, and more - everything you need to sharpen your knowledge of Scarlett.

Scarlett: The Sequel to Margaret Mitchell's Gone with the Wind Summary & Study Guide includes comprehensive information and analysis to help you understand the book. This study guide contains the following sections:

This detailed literature summary also contains Topics for Discussion and a Free Quiz on Scarlett: The Sequel to Margaret Mitchell's Gone with the Wind by Alexandria Ripley.

Scarlett O'Hara Butler is living separate from her husband, Rhett Butler, following the death of their daughter Bonnie and of Scarlett's best friend, Melanie Wilkes. Scarlett only realizes how much she cares for Melanie and for Rhett after she's lost both and sets out to regain Rhett's love and trust. Scarlett, however, is a social creature by nature and her outgoing ways earn her the scorn of many until she has few friends remaining. Scarlett believes Rhett will return to her, based on the fact that he is willing to pay the bills on her expensive, elaborate house in Atlanta. When time passes and Rhett doesn't return, Scarlett becomes anxious and decides to go to him in Charleston where he is staying with his mother.

There, Scarlett immediately wins the affection of Rhett's mother, Eleanor, but finds she doesn't fit in well with Charleston society. When Rhett offers to spend the social season as her escort and to give Scarlett a half million dollars, Scarlett agrees to his terms - that she will leave him alone and never return. A brief sexual encounter after the pair almost drowns leaves Scarlett pregnant. She is now certain that she will be able to draw Rhett back to her side by telling him that she's pregnant but has met with several O'Hara cousins by this point and decides she'll make a trip to Ireland to visit her O'Hara grandmother before she returns to the confines of Charleston society and Rhett's arms. While in Ireland, Scarlett receives the news that Rhett has filed for divorce. Before she can make the return to America, she discovers Rhett has married a young woman named Anne Hampton.

Scarlett is initially devastated but takes control of her life, sells off the majority of her property and puts the remainder of her business in the hands of others. Returning to Ireland, she buys property that once belonged to the O'Haras and quickly makes a name for herself both in her willingness to work at any job in order to make the property prosper and her courage in standing up to the military. She is soon caught up in the cause of the Irish people who oppose the English rule, but Scarlett can't resist the draw of the social life and is soon socializing with the very people her Irish relatives fear and hate. As the clash between the two factions seems inevitable, Scarlett raises her daughter and wars with her abiding love for Rhett. Scarlett learns that Rhett's wife died in childbirth and that the infant died shortly after, a point that means Rhett is again free, though Scarlett believes him to be a continent away. When the two meet by chance, Scarlett is certain Rhett has come back for her. As the story draws to a close, Scarlett witnesses the clash between the military and the Irish, a clash that results in the death of a young officer who had proposed to Scarlett and of whom she is very fond, followed by the death of her cousin, Colum, who is her daughter's godfather. Rhett and Scarlett escape the fighting and Scarlett reveals to Rhett that he has a daughter. The townspeople search for the family, intent on their hatred for Scarlett who has, in their opinion, crossed the line with her loyalties. Scarlett and Rhett agree that they will leave Ireland and Rhett explains to Scarlett that she has no need of a home because she belongs with him.

More summaries and resources for teaching or studying Scarlett: The Sequel to Margaret Mitchell's Gone with the Wind.

Scarlett: The Sequel to Margaret Mitchell's Gone with the Wind from BookRags. (c)2022 BookRags, Inc. All rights reserved.