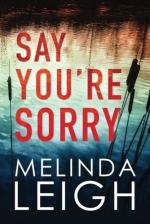 Melinda Leigh
This Study Guide consists of approximately 45 pages of chapter summaries, quotes, character analysis, themes, and more - everything you need to sharpen your knowledge of Say You're Sorry.

This detailed literature summary also contains Quotes and a Free Quiz on Say You're Sorry by Melinda Leigh.

The novel begins with the third-person narrator chronicling the last night of Tessa Palmer’s last night alive. She ran through the woods as a man she thought she could trust chased after her. When he found her, he stabbed her. The unnamed killer washed the blood off of his hands and lamented that he had murdered the girl he loved in a fit of rage. He decided he had to do whatever he had to do in order to stay out of jail.

The next night, Morgan Dane went out to dinner with Bryce Walters, the DA of Scarlet Falls. She had worked as a prosecutor for many years, but when her husband, John, died at war she left her job to move in with her father and concentrate on raising her three young girls. Now that two years had passed, she wanted to get her life back. Bryce Walters offered her the job that she applied for, and she agreed to take it. When she got home, her grandfather was playing chess with their neighbor, Nick. she looked at the picture of John on her nightstand and considered opening the letter that she had in a drawer. She still could not bring herself to read it. Evelyn Palmer, the grandmother and guardian of Tessa Palmer called Morgan to see if Tessa, who babysat for Morgan, was at her house. Morgan said that Tessa had not been over to babysit the children in almost a month. Evelyn confessed that she and Tessa had gotten into a fight the night before and Tessa had never come home and now she was not with her friend Felicity, like she said she would be. Morgan thought this was out of character, so she told Evelyn she would go look for Tessa.

Lance Kruger was an officer with the police department that had been injured during a shooting. He had gone to work as a PI for a retired detective, Sharp, who had been a mentor and pseudo-father to him growing up, after his own father disappeared and Sharp got put on the missing-person-case. Lance got a call from Morgan, a girl he used to date in high school, asking him for help. He went to her house to pick her up. Felicity called Morgan and told her that Tessa had been at a party at the lake the night before with her secret boyfriend, Nick. Lance and Morgan drove to the lake and found Tessa’s car. While Lance called the police, Morgan found Tessa’s body.

Lance went to work and started looking into a missing-person case on Jamie Lewis, a sixteen-year-old girl. When he was questioning her best friend, Tony, a boy named Robby approached him and showed him a YouTube video of the party at the lake. Jamie was in the background as Nick and another boy fought each other. Lance went to show the video to the police chief, Horner, and then drove to Nick’s house to ask him about the fight. Morgan looked out her window and saw police cars swarming Nick’s house. She went across the street and watched as the police arrested Nick after finding a bloody knife in the backyard. Lance got out of his car and approached the scene. Nick’s father, Bud, said there was a mistake. Nick could not hurt anyone. He threw up at the sight of blood. Morgan had seen it happen, and she believed Nick was a good kid. Morgan decided to take on the case, pro bono, despite the fact that it would ruin her new job and possibly her career. She asked Lance and Sharp to work with her, and they agreed.

Nick told Morgan that he and Jacob had gotten into a fight after Jacob called Tessa a derogatory word. Afterwards, Nick and Tessa drove to the other side of the lake and had sex in the backseat of his car. She started to cry, so he drove back to the party and she broke up with him in front of everyone. He left her by her car and went home. The DA found DNA evidence that matched Nick and suspected that he had raped her. They had also discovered that she had been pregnant with another man’s child, and so suspected he had found out and murdered her.

Sharp and Lance cleared out an office for Morgan to work in. She and Lance began investigating the death of Tessa in order to find the real killer and prove Nick was innocent. They met with Jacob Emerson and his father, and then Robby Barone and his father. Both boys seemed to be lying, but their fathers would not let them speak freely. Morgan and Lance went back to the crime scene to retrace the night of Tessa’s death, but were attacked by Dean Voss, a military vet who had taught at the local high school before a student claimed she saw him kissing another girl. Dean made suggestive comments about being responsible for a girl’s death. Morgan and Lance met with Felicity, who showed them pictures of Jacob molesting an unconscious Tessa earlier in the summer.

Nick was stabbed in prison, and Morgan and Lance went to wait with his father while he was in surgery. When the doctors said he would be okay, they went back to Lance’s house and Morgan got drunk. She kissed Lance, but he told her he did not want to take advantage of her. The next day, Morgan and Lance went to see Mrs. Voss and ask her about her husband. While they were talking to her, Dean Voss snuck into the house and held them hostage with a gun. He made more comments about being responsible for the death of a girl. The police showed up and shot him.

The DA told Morgan he was temporarily dropping the charges against Nick, but Morgan was not convinced that Dean was guilty. Morgan went to the hospital to tell Nick the good news, but she discovered Phillip Emerson in the room, strangling Nick with a pillow. Phillip attacked Morgan and took her hostage. Lance showed up and, when Morgan ducked, Lance shot Phillip. Phillip told them, as he was dying, that he had been in love with Tessa. When she had tried to break up with him, he had raped her and then, when she threatened to tell her grandparents about him, he had gone into a rage and killed her. Morgan went home and read the letter from John, which told her not to feel guilty about moving on with her life. She went to the office and accepted Sharp’s offer of a permanent job with the small firm. She and Lance decided that they wanted to go out on a date, and then they kissed.

More summaries and resources for teaching or studying Say You're Sorry.