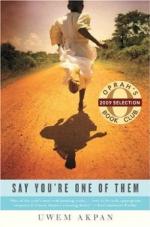 Say You're One of Them Summary & Study Guide

Uwem Akpan
This Study Guide consists of approximately 55 pages of chapter summaries, quotes, character analysis, themes, and more - everything you need to sharpen your knowledge of Say You're One of Them.

Say You're One of Them Summary & Study Guide Description

Say You're One of Them Summary & Study Guide includes comprehensive information and analysis to help you understand the book. This study guide contains the following sections:

This detailed literature summary also contains Topics for Discussion and a Free Quiz on Say You're One of Them by Uwem Akpan.

Say You're One of Them is a collection of three short stories and two novellas set in varying countries in Africa, all told through the narration of vulnerable children during moments of extreme upheaval in their lives. "An Ex-Mas Feast" tells the story of eight-year-old Jigana's family struggle to deal with the extreme poverty that has forced them into street begging and sends their twelve-year-old daughter into a life of child prostitution. The story revolves around the family's decision to sacrifice their twelve-year-old to ensure that Jigana will be able to attend school and give the family a brighter future. Jigana is overwhelmed with guilt that his sister must work full-time as a prostitute for his own benefit and by the end of the story, he removes himself completely from the family - in the hopes that it will also remove him from the guilt - by running away.

"Fattening for Gabon" is told through the eyes of ten-year-old narrator Kotchikpa. At the opening of the story, Kotchikpa's uncle Fofo has just received a new motorcycle from a wealthy benefactor. The same benefactor wants to make donations for Kotchikpa and his five-year-old sister, Yewa, to attend school. The benefactor, who soon come be called Mama and Papa by the children, ensure that the children are always well-fed, have new clothes, and that Fofo has plenty of new luxuries. Fearing that all this will be stolen, Fofo rebuilds the family hut and keeps all his belongings under strict lock and key, rarely taking them from storage and enjoying them. Fofo begins holding informal lessons for the children, drilling them about fictional facts about their background in case they should be quizzed about their pasts by police officers on their way to Gabon with Mama and Papa. It soon becomes clear that Fofo is preparing to sell the children into slavery, and that Mama and Papa are human traffickers. By the end of the story, Fofo has had a change of heart and attempts to escape with the children, but is eventually killed. The children are held under lock and key, but miraculously, Kotchikpa manages to escape, although he will be forever haunted by the screams of the sister he was forced to leave behind.

"What Language is That" is a short story about two girls growing up in Ethiopia during the arbitrary divide between Christian and Muslim territory. The girls, who are both six years old, grew up very close, almost as sisters. The Muslim girl, Selam, was encouraged to eat whatever she felt comfortable with while at her best friends' home. There was no tension or conflict about religion, so it comes as a shock to everyone, including the reader, when the best friends are separated during the divide and told they are no longer allowed to play together. Despite this ban, the girls escape to their balconies and mime messages to each other, proving that the heart speaks louder than words.

"Luxurious Hearses" is the story of a terrified Muslim boy traveling from the North to the South of Nigeria during the civil war between the Muslims and the Christians. He has been forced to make this trek after Muslim friends who owe him money accused him of being Christian so they could get out of their debt. They beat him and stone him until he was near death. In the moments before they lit his battered body on fire, Jubril, the protagonist, rallied his strength and managed to run away. He passed out in a field and was rescued by a Muslim man who hid him in his house, even when Christian rebels threatened to light his house on fire, and eventually did, the man did not reveal Jubril's hiding place. After the wave of destruction, the man released Jubril, giving him money and a disguise to make his way to the South aboard a bus full of Christian refugees. Jubril would have to hide his Muslim identity - most notably his amputated hand, which would immediately identify him as a Muslim - and his Northern accent. Aboard the bus, Jubril is terrified, knowing that at any moment, he could be killed by this mob if his Muslim identity is made known. His troubles first begin when an old tribal chief is sitting in Jubril's assigned seat and refuses to give it over. Various other occurrences, such as the forceful removal of a man with malaria, police threats, spiritual possession, and interactions with his fellow passengers threatens to reveal Jubril's secret, but he survives for many hours, before the bus even begins its long journey. After hours of avoiding the television sets that beam Western images into the bus, Jubril relents and sees an image of a mosque burning. The image is so powerful, he begins to weep, and forgetting where he is, uses his stump of a hand to wipe away the tears. His error is immediately spotted and he is taken outside of the bus and murdered.

"My Parents' Bedroom" is the harrowing story of a nine-year-old girl's experience during the Rwandan genocide. At the opening of the story, the girl's mother, Maman, leaves her in charge of her one-year-old brother while she goes out for the night, making the girl promise that if anyone comes, she'll say that no one is home and that she's one of them. That night, a mob of people, lead by her Uncle, break into the house in search of her Papa. When they cannot find them, an old man rapes the nine-year-old girl. Her parents return in the morning, agitated and short-tempered. The girl hears tiny sneezes and thinks there is a ghost in her house. That night, the mob returns and the Uncle forces the Papa to kill Maman because she is a Tutsi. He does, and simply walks blankly out of the house without acknowledging his children. The girl gathers up her brother and walks through the streets, full of corpses, not knowing where she's going, but that she must keep them safe. The last thing she sees is her parents' house up in flames, and knows that all the Tutsi people her parents had been hiding in the attic, keeping them safe from the genocide, have been killed.

More summaries and resources for teaching or studying Say You're One of Them.

Say You're One of Them from BookRags. (c)2022 BookRags, Inc. All rights reserved.