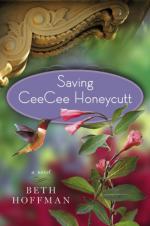 Related Topics
Looking For Me

Beth Hoffman
This Study Guide consists of approximately 86 pages of chapter summaries, quotes, character analysis, themes, and more - everything you need to sharpen your knowledge of Saving CeeCee Honeycutt.

Saving CeeCee Honeycutt by Beth Hoffman is a story about a young girl named Cecelia who begins her life in Willoughby, Ohio with her mother Camille and her father Carl. Cecelia's father is a travelling salesman who spends most of his time on the road, and as such, Cecelia is raised mostly by her mother. Unfortunately, her mother develops signs of psychosis when Cecelia is just seven years old, and Cecelia's life is a challenge from then forward.

Cecelia first notices something wrong with her mother when she comes down in the morning and nothing is ready for her to go to school. Instead, her mother sits despondent and barely responsive. When she does communicate, she tells Cecelia that one day she'll take her back to Georgia where people still know how to live, and know what etiquette and propriety are - something sadly lacking in the north, she insists. Camille gets worse, and Cecelia never knows what she might come home to. One day, walking home from school, a group of boys tease her about the fruitcake in her front yard. Cecelia is horrified when she discovers her mother in the front yard, her dark hair bleached white and dressed in an old yellow prom dress complete with sash and tiara. She is soliciting votes for the great state of Georgia, she tells everyone who passes, blowing kisses to them all.

Cecelia begins to spend more time in the library, hiding from the issues at home. On the rare occasions that her father is home, they argue non-stop and his time at home becomes more and more infrequent. When a woman begins calling their house for him and won't leave her name, Cecelia knows he is cheating on her mother. The next time he comes home, she begs him to put her mother in a home, but he insists the cost is prohibitive and since she isn't hitting Cecelia, Cecelia should just try to keep her inside. A part of Cecelia begins to hate her father that day.

Cecelia's only respite occurs on Sundays when she spends them with their elderly neighbor, Mrs. Gertrude Odell. Mrs. Odell provides the only normalcy Cecelia's life knows and Cecelia relies on her more than once when her mother is psychotic. One day, her mother invites Cecelia to join her on a shopping excursion for a new dress, telling her that they can enter a mother/daughter competition. In that moment, Cecelia wishes her dead, or at the very least, wishes she'd just keep walking and not come back. Cecelia gets her wish, when her mother steps in front of an ice cream truck and is hit and killed.

Carl is at a loss as to how to proceed when Cecelia's great aunt Tallulah Caldwell arrives. She makes it clear that Cecelia needs a stable home, and suggests that she take her back to Georgia with her. The next morning, Carl goes to the hardware store just before Tallulah arrives. She introduces herself, and helps Cecelia load her two boxes of possessions. Her father leaves only a note wishing her well as a goodbye after assuring her that one day she'll thank him for this.

Though the transition is difficult, and Cecelia struggles with her mother's death, life for Cecelia improves exponentially. She is surprised over the course of the summer with Tallulah to learn that both her mother and her father were right. Her mother had always insisted that in Georgia, people knew how to treat each other and how to live. Cecelia discovers this is true. Her father told her that one day she'd thank him for sending her there, and this also turns out to be true.

By the time the summer is over, Cecelia is enrolled in Rosewood School for Girls; has a new friend named Dixie Lee to go to school with; she loves her Aunt Tootie and Oletta who runs the household; and has made numerous friends including their neighbor Thelma Rae Goodpepper. The crowning touch occurs when circumstances conspire to have Mrs. Odell living with her in Aunt Tallulah's house as well.